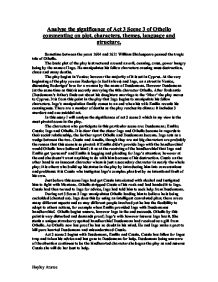 Analyse the significance of Act 3 Scene 3 of Othello commenting on plot, characters, themes, language and structure.

Analyse the significance of Act 3 Scene 3 of Othello commenting on plot, characters, themes, language and structure. Sometime between the years 1604 and 1611 William Shakespeare penned the tragic tale of Othello. The basic plot of the play is structured around an evil, cunning, crass, power hungry being by the name of Iago. He manipulates his fellow characters causing mass destruction, chaos and many deaths. The play begins in Venice; however the majority of it is set in Cyprus. At the very beginning of the play you see Roderigo (a fool in love) and Iago, on a street in Venice, discussing Roderigos' love for a woman by the name of Desdemona. However Desdemona (at the same time as this) is secretly marrying the title character Othello. After Brabantio (Desdemona's father) finds out about his daughters marriage to the 'Moor' the play moves to Cyprus. It is from this point in the play that Iago begins to manipulate his fellow characters. Iago's manipulation finally comes to an end when his wife Emilia reveals his cunningness. There are a number of deaths as the play reaches its climax: it includes 3 murders and one suicidal act. In this essay I will analyse the significance of act 3 scene 3 which in my view is the most pivotal scene in the play. ...read more.

Due to his rage and anger at his wife he tells Iago how he wishes death upon his wife and ex lieutenant ...and how he plans to do so. The scene builds to a dramatic end where Iago influences Othellos decision in murdering the innocent victims. It could be argued that Othello is a 'weak character' who is easily manipulated; this can be seen as a total paradox to his actual authority. Iago and Othello are the two main characters in act 3 scene 3. When the two characters act alongside each other Iago leads all conversation and influences Othellos speech; Iago influences Othello into using vulgar, crude, b******l language. Because Iago is in control he uses quick speedy conversation to drill information into Othello. Iago plays a large part in Act Scene 3. I f you analyse his part in detail you will notice a consistent use of crude vulgar language also known as b******l language. Iago begins as the only character to use this specific type of language however Othello (due to the repetitive use of it from Iago) also begins to use it. An example of each characters uses are: Iago when he describes Cassios and Desdemonas affair "Prime as goats, hot as monkeys, as salt as wolves in pride" Othello uses the phrase: "Thou hadst better been born a dog" As you can see b******l language portrays crude, earthy, and aggressive images. ...read more.

Audiences whom are aware of the ending means that the play comes across as very ironic: this has a dramatic effect on the audience meaning that they are resigned to the chaos and eternal damnation (perdition) that is the outcome of the play. This specific quote is of a very ironic nature "Excellent wretch! Perdition catch my soul. But I do love thee! And when I love thee not chaos has come again" this gives the audience a thought provoking statement where they have to analyse the paradox between love and chaos, this may enforce the reader to empathise with Othello and try and interpret his words like he does. After spending a long time studying Othello I have come to the conclusion that all of Shakespeare's plots for his plays follow a genetic pattern. All of them have a character trying to achieve a goal or ambition and in the end their hunger for their ambitions drives them to either murder or even suicide. For example in Macbeth, he wants to be king (ambition) so he kills Duncan (death); Romeo and Juliet want to fall in love and be accepted by their families (ambition) that results in two suicides (deaths) and then finally in Othello Iago wanted lieutenancy (ambition) consequences for his desire are two murders to two innocent wives and one suicidal act due to guilt (deaths). Have you ever thought about it? Hayley Anstee ...read more.