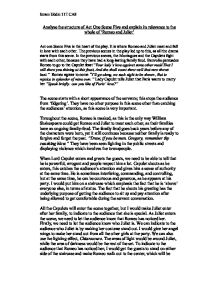 Analyse the structure of Act One Scene Five and explain its relevance to the whole of 'Romeo and Juliet' Act one Scene Five is the heart of the play. It is where Romeo and Juliet meet and fall in love with each other. The previous scenes in the play led up to this, as all the drama starts from this scene. In the previous scenes, the Montagues and the Capulets fight with each other, because they have had a long-lasting family feud. Benvolio persuades Romeo to go to the Capulet feast "Your lady's love against some other maid That I will show you shining at this feast, And she shall scant show well that now shows best." Romeo agrees to come "I'll go along, no such sight to be shown, But to rejoice in splendor of mine own." Lady Capulet tells Juliet that Paris wants to marry her "Speak briefly: can you like of Paris' love?" The scene starts with a short appearance of the servants; this stops the audience from 'fidgeting'. They have no other purpose in this scene other than catching the audiences' attention, as this scene is very important. Throughout the scene, Romeo is masked, as this is the only way William Shakespeare could get Romeo and Juliet to meet each other, as their families have an ongoing family-feud. ...read more.

If I was to portray this scene to a modern audience, I would make Juliet older than she would have been be during Shakespeare's time, because girls would get married young and the audience would find it unethical. Earlier in the play (Act one, scene four), Romeo has said how much he loves Rosaline. "I am too sore enpierced with his shaft to soar with his light feathers, and so bound, I cannot bound a pitch above dull woe: Under love's heavy burden do I sink." When he sees Juliet, it is love at first sight. "Did my heart love till now? Forswear it, sight. For I ne'er saw true beauty till this night." This leads us to believe that Romeo is fickle. Rosaline is used to show the depth of Romeo's feelings for Juliet. Once he sees her, he forgets all about other women. Tybalt is the first to recognise Romeo through his disguise, and would kill him if not for his uncle, Lord Capulet's forbidding of it. "This, by his voice, should be a Montague Fetch me my rapier, boy." Tybalt overhears Romeo and this leads to an argument between him and his uncle Capulet, Juliet's father. Capulet doesn't allow Tybalt to fight because he doesn't want to spoil the party. Capulet's father also respects Romeo. When Tybalt rebels against his uncle, Capulet says "He shall be endured, Am I the master here or you?" ...read more.

Romeo and Juliet have come to "Love a loathed enemy". The hatred between the two families separates them from each other. The audience knows that Romeo and Juliet are going to die. "A pair of star-cross'd lovers take their life; Whole misadventured piteous overthrows Do with their death bury their parents' strife." Dramatic Irony is present in this scene, as Juliet will die for loving him. "Go ask his name.-If he be married. My grave is like to be my wedding bed." In conclusion, as this is one of the most important scenes in the play, Act one scene five is considerably dramatically effective. Shakespeare uses Capulet's speech to set the mood of the scene, which is a happy mood. This is a contrast to the beginning of the play, so this scene is already different. Shakespeare used Romeo's expression of love to enhance the mood of the scene. Tybalt's speech is used to bring back the conflict between them and also to use the key theme of hate. Finally, Shakespeare adds the kiss of Romeo and Juliet, to amplify the passion and drama, but also to express a key theme of the play, love. These two themes lie throughout the whole play, and the reason why this scene is popular is because many people can relate to these two themes, of love and hate. The scene ends on a cliffhanger, which leaves the audience watching long into the night by carrying over the suspense at the end of the scene. ?? ?? ?? ?? Ikram Uddin 11T CA8 ...read more.