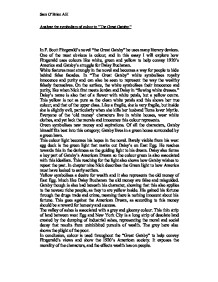 Analyse the symbolism of colour in &quot;The Great Gatsby

Analyse the symbolism of colour in "The Great Gatsby." In F. Scott Fitzgerald's novel "the Great Gatsby" he uses many literary devices. One of the most obvious is colour, and in this essay I will explore how Fitzgerald uses colours like white, green and yellow to help convey 1920's America and Gatsby's struggle for Daisy Buchanan. White features most strongly in the novel and becomes a way for people to hide behind false facades. In "The Great Gatsby" white symbolises royalty innocence and purity and can also be seen to represent the way the wealthy falsely themselves. On the surface, the white symbolises their innocence and purity, like when Nick first meets Jordan and Daisy in "flowing white dresses." ...read more.

Everyone of the 'old money' characters live in white houses, wear white clothes, and yet lack the morals and innocence this colour represents. Green symbolises new money and aspirations. Of all the characters, Gatsby himself fits best into this category; Gatsby lives in a green house surrounded by a green lawn. This colour light becomes his hopes in the novel. Barely visible from his west egg dock is the green light that marks out Daisy's on East Egg. He reaches towards this in the darkness as the guiding light to his dream. Daisy also forms a key part of Gatsby's American Dream so the colour green is also associated with this idealism. ...read more.

His gained his fortune through the drugs trade and crime, meaning there is nothing innocent about his fortune. This goes against the American Dream, as according to this money should be a reward for honesty and success. The valley of ashes is associated with a grey and gloomy colour. This thin strip of land between west Egg and New York City is a long strip of desolate land created by the dumping of industrial ashes, representing the moral and social decay that results from uninhibited pursuits of wealth. The grey here also shows the plight of the poor. In conclusion, colour is used throughout the "Great Gatsby" to help convey Fitzgerald's views and show the 1920's American society. It exposes the morality of the characters, and the effects wealth has on people. ?? ?? ?? ?? Sam O'Brien AH ...read more.

The question concentrates on one of the many thematic motifs of F. Scott Fitzgerald's 'The Great Gatsby', with particular consideration to the colour used to illustrate New York. This candidate expresses some fair analysis of how the author uses colour ...

The question concentrates on one of the many thematic motifs of F. Scott Fitzgerald's 'The Great Gatsby', with particular consideration to the colour used to illustrate New York. This candidate expresses some fair analysis of how the author uses colour as a thematic tool for creating characters and scenery, and also it's use as a tool for prefiguring events. The focus is blurred and there could be a better structure to the answer, as the candidate does seem to fix our attentions in the introduction and creates a very regimented feel - "in this essay I will explore how Fitzgerald uses colours [...] white, green and yellow". Openers like this are very prescribed and border on unimaginative. Candidates may think it's a safe way of opening their analytical essays - and they'd be right - but safety and conformity is not what the examiner wants to see. Vary your openers; try something new and don't give away the whole premise of the essay in the first line. Talk instead about the steer of the question. In this essay, for example, the candidate may write about the importance of Fitzgerald's use of colour, rather than just saying it is important - highlight where it is used (very generally; possibly just referencing characters and such) and the like - trying something different will instantly stop the examiners' eyes from shutting at the thought of such a clichÃƒÂ©d opener.

The Level of Analysis is reasonable. There is focus on the features of the colours white, yellow, green and grey, but the candidate has not fully appreciated their use to the fullest. They make sweeping generalisations about what we as a society today believe to be resembled by the colours Fitzgerald uses - white is innocence, grey is for plight and barrenness, etc. The candidate must place these in the context of the novel and, most importantly, specific chapters/scenes from the novel. The colours mean different things in different moments. For instance, Jordan Baker and Daisy Buchanan are described as wearing "flowing white dresses" when Carraway first meets them, but when he next sees them in a similar situation (with them both lying on couches in the Buchanan's mansion relaxing), they appear "weighed down" by "silvery white" gowns. This suggests that in the latter occasion, the white faÃƒÂ§ade they affect themselves with cracking and showing it's wear and tear on them, as they appear heavy and mechanical as opposed to before where Carraway suggests they looked as if they "has just flown about the house". It should also be noted that white is not a colour of royalty - blues and purples are predominantly associated with royalty, with the same colours plus gold and crimson if we adopt the context of America in the 1920's (hence the Buchanan's walls being described as "deep crimson". The same can be said for the presence of yellow in the novel, though the candidate has covered a wide range of it's uses as an indicator of some underlying theme but there is little evidence that the candidate understand the gravity of those theme. The yellow does not just resemble impure white - yellow is a colour of warmth and flamboyance, and it colours Gatsby's car; symbolic of a man who wants to be noticed.
Furthermore, there is occasional evidence that suggests the candidate does not fully comprehend the characters. Each is open to interpretation but I don't think anyone who has read the novel would say the Daisy Buchanan is remotely "evil" or that she intentionally killed Myrtle Wilson (Daisy did not know that Myrtle was her husband's lover - only that he had a lover).

The Quality of Written Communication is fine. Only few instances where the standards of writing titles and names slip are seen. This will lower candidates' marks though - all candidates must refer to this novel wit capital letters at the start of each word in the title - "The Great Gatsby", not "the Great Gatsby", and certainly not "Great Gatsby".