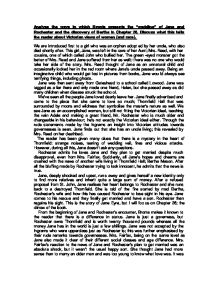 Analyse the ways in which Bronte presents the &quot;wedding&quot; of Jane and Rochester and the discovery of Bertha in Chapter 26. Discuss what this tells the reader about Victorian views of women (and race).

Analyse the ways in which Bronte presents the "wedding" of Jane and Rochester and the discovery of Bertha in Chapter 26. Discuss what this tells the reader about Victorian views of women (and race). We are introduced first to a girl who was an orphan adopted by her uncle, who also died shortly after. This girl, Jane, was left in the care of her Aunt; Mrs. Reed, with her cousins, one of which called John who bullied her. The green-eyed monster got the better of Mrs. Reed and Jane suffered from her as well; there was no one who would take her side of the story. Mrs. Reed thought of Jane as an unnatural child and occasionally locked her in the red room where Jane's uncle passed away. Being an imaginative child who would get lost in pictures from books, Jane would always see terrifying things, including ghosts. Jane was then sent away from Gateshead to a school called Lowood. Jane was tagged as a liar there and only made one friend, Helen, but she passed away as did many children when disease struck the school. We've seen all the people Jane loved dearly leave her. Jane finally advertised and came to the place that she came to love so much; Thornfield Hall that was surrounded by moors and wildness that symbolise the master's nature as well. We see Jane as an accomplished woman, but still not fitting the Victorian ideal, teaching the vain Adele and making a great friend, Mr. Rochester who is much older and changeable in his behaviour; he's not exactly the Victorian ideal either. Through the rude statements made by the Ingrams an insight into Victorian attitudes towards governesses is seen. Jane finds out that she has an uncle living; this revealed by Mrs. Reed on her deathbed. The reader has been given many clues that there is a mystery in the heart of Thornfield: strange noises, tearing of wedding veil, fires and vicious attacks. ...read more.

The word "thunder" is another example of pathetic fallacy and how what she believes about everything has been struck so suddenly. On top of that, the words "fire" and "frost" show that what she has just heard is evil and shuddering. This mirrors the views of the Victorian society would have. Afterwards, the reader sees that Jane's unconventional nature is emphasised as she is the one who comes to Rochester's rescue when he becomes blind; it is usually the male hero who comes to rescue his love. Rochester finally capitulates and admits he has a wife. He claims he was tricked into marrying her. Being the younger son, not expecting to inherit the estate from his father, his father wanted him to marry someone wealthy like Bertha so Rochester will live a full life, but his father died and soon after his older brother. As a result, Rochester inherited the whole estate which is now seen as a prison by him because of the maniac living there. Bertha, he claims was not what she seemed. Bertha is presented as a "mysterious lunatic" before her name is even mentioned by Rochester. This shows how low he thinks of her to present her to everyone with the theme of madness first so they don't think so badly of him. Also, he doesn't think of her as a wife who he loves, but just a mad person. Rochester tells everyone of the family history: "mad family; idiots and maniacs through three generations". The reader may see a r****t implication: "Her mother, the Creole, was both a madwoman and a drunkard!". Bertha's mother's background is not relevant but he's using it in the same sentence when he talks about madness. The fact that Bertha is not English is something that Rochester uses for it to be harder for him to be judged because he knows that the Victorian society are less sympathetic towards people from different backgrounds; he is using this to his advantage. ...read more.

as when Jane is first introduced, she gives the impression of someone who holds a lot of barriers. The theme of darkness returns again: "eddying darkness seemed to swim around me, and reflection came in as black and confused a flow". This is another example of her feeling trapped with no way out. The reader sees Jane's self-abandonment: "laid me down in the dried-up bed of a great river". There is another example of pathetic fallacy when Jane "felt the torrent come", but "to rise" she "had no will". This symbolises metaphorically how overpowering her grief is and the pain of the loss she has suffered as the water pours over her "dried-up bed". She just wants to drown: "in full heavy swing the torrent poured over me". Jane turns to God instead of a husband: "One idea only still throbbed life-like within me-a remembrance of God". This is the only thing that is keeping her alive as she remembers something from the psalms: "Be not far from me, for trouble is near: there is none to help". This tells the reader that she feels that she needs God because no one else can help her get through the "trouble". The reader come to realise that after the frost and ice she was describing in page 10, everything melted and the flood came. This symbolises how finally, the tears came; "the floods overflowed" her. Throughout chapter 26, the reader sees unconventional characteristics from both the bride and the bridegroom, speed, breaking customs, bad omens, blasphemy, madness and darkness. All of the reasons of how Rochester and Jane's relationship was doomed built up slowly until the moment when Jane suffered during that bitter hour. Although, Jane and Bertha have been contrasted many times, we can see two examples of women who do not fit the Victorian ideal. Jane was different even as a child with her wild imagination and strong-willed character; Bertha was too passionate and free spirited for a life in England. They have both also suffered at the hands of Rochester. ...read more.