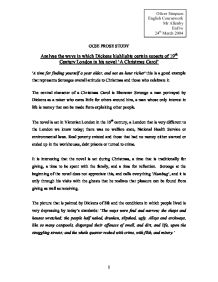 GCSE PROSE STUDY Analyse the ways in which Dickens highlights certain aspects of 19th Century London in his novel 'A Christmas Carol' 'A time for finding yourself a year older, and not an hour richer' this is a good example that represents Scrooges overall attitude to Christmas and those who celebrate it. The central character of a Christmas Carol is Ebenezer Scrooge a man portrayed by Dickens as a miser who cares little for others around him, a man whose only interest in life is money that can be made from exploiting other people. The novel is set in Victorian London in the 19th century, a London that is very different to the London we know today; there was no welfare state, National Health Service or environmental laws. Real poverty existed and those that had no money either starved or ended up in the workhouses, debt prisons or turned to crime. It is interesting that the novel is set during Christmas, a time that is traditionally for giving, a time to be spent with the family, and a time for reflection. Scrooge at the beginning of the novel does not appreciate this, and calls everything 'Humbug', and it is only through his visits with the ghosts that he realizes that pleasure can be found from giving as well as receiving. The picture that is painted by Dickens of life and the conditions in which people lived is very depressing by today's standards: 'The ways were foul and narrow; the shops and houses wretched; the people half naked, drunken, slipshod, ugly. ...read more.

'Every person has a right to take care of themselves. He always did.' This means that when Scrooge was alive all he was bothered about was making money and he didn't care how he got it even if it meant overworking and mistreating people. So now he is dead they can take care of themselves just like he did. Dickens also shows how the poor where mistreated and how there where extremely overworked for very little money. A good example of this is how Scrooge's worker Bob Cratchit and how he had no holidays and how he had to specifically ask for time off on Christmas day 'you'll want all want all day to-morrow I suppose?'. Dickens throughout his novel includes a range of different social classes that occurred in the 19th century. Each social class gave a family a place in society that made people have different reputations. The class you where in depended on many things mainly by how much money and possessions you have and sometimes your family background. These classes ranged from working class which where the poor (the Cratchit's) to middle class (Scrooge) who where the ones who owned businesses to the higher class people such as the Lord Mayor. The people you socialized with where, depended on your class and their class. It was very rare for people of the higher class to know and socialize with the working class. ...read more.

The main representation of Christmas time for the working classes is when Dickens describes the Cratchit's Christmas meal and how they spent Christmas. The Cratchit's Christmas meal was nothing compared to what the middle and upper class had, but whatever the Cratchit's settled for what they could get for the money they had. They had one small Christmas pudding that they shared between six children and two adults. However the Cratchit's where very appreciative a lot more than the other classes as they took what they had for granted. Scrooge particularly despises Christmas as he views it as 'a time for finding yourself a year older, and not an hour richer' and he does not believe in giving or supporting any charities and he does not believe in goodwill. This is suggested in many different things Scrooge says in the novel. 'God bless you, merry gentlemen!', 'Scrooge seized the ruler with such energy of action, that the singer fled in terror.' This was said by Scrooge when he was visited by the carol singers, it shows how much anger and hate Scrooge has towards Christmas and those who celebrated it. In conclusion, the image that one is left with from Dickens is a very depressing one, one of dark, smelly, and polluted streets. Images of poverty and hardship, and a society that cared little for the welfare of others, where if you had money you could live comfortably, but if you did not life was very tough. It is not a place where, I feel, anyone today would like to live. 1 ...read more.