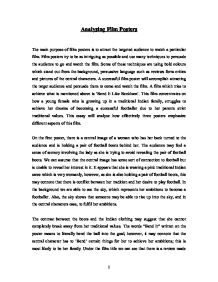 Analysing Film Posters The main purpose of film posters is to attract the targeted audience to watch a particular film. Film posters try to be as intriguing as possible and use many techniques to persuade the audience to go and watch the film. Some of these techniques are using bold colours which stand out from the background, persuasive language such as reviews form critics and pictures of the central characters. A successful film poster will accomplish attracting the target audience and persuade them to come and watch the film. A film which tries to achieve what is mentioned above is 'Bend It Like Beckham'. This film concentrates on how a young female who is growing up in a traditional Indian family, struggles to achieve her dreams of becoming a successful footballer due to her parents strict traditional values. This essay will analyse how effectively three posters emphasize different aspects of this film. On the first poster, there is a central image of a woman who has her back turned to the audience and is holding a pair of football boots behind her. The audience may feel a sense of secrecy involving the lady as she is trying to avoid revealing the pair of football boots. We can assume that the central image has some sort of connection to football but is unable to reveal her interest in it. ...read more.

She is also holding a ball over her head as if she is going to throw the ball. The reason that her face be concealed may be because she is trying to hide something from her parents which may upset them; this gives a sense of secrecy. The football may symbolise her desire to play football. The audience can surely notice that there is an Indian piece of jewellery on the girl's forehead which tells that she comes from a traditional background but also the same pattern of the jewellery is printed on the football, this may contrast her desire to play football and her tradition. Similarly to the second poster, there are the central characters family who are all wearing traditional clothing and have a puzzled expression on their faces. They all seem to be in the way of the goal, which may connote that they are trying to stop her from what she wants to do. Next to the family members is a white teenager who the audience assume to be the girls friend. Oppositely to the family her friend is wearing very sporty western clothing which is a contrast between both cultures. The background colour of the poster is blue which represents the sky; however, it also connotes the central characters ambitions to achieve her dream of becoming a footballer. ...read more.

We see on the third poster that there I a close friend of 'Jesse' standing next to her family wearing sporty clothing which may represent a more western culture. As mentioned before the whole purpose of a film poster is to attract a particular audience. Each poster tries to target a specific group of people. In the first poster the central character is wearing traditional clothing and the mood does not seem to be happy, so I would guess that this poster is targeting a more mature audience like adults rather than teenagers. However, the second poster appears to be doing completely the opposite by using very bright colours and the font is more appealing to a younger audience. Also, the characters 'Jesse' and 'Joules' are both acting in a childish manner by play fighting which may suggest that it is targeted at young teenagers. Similarly, the last poster portrays the main character as being more upbeat and happy and the background colours seem to be brighter which may appeal to younger people. On the whole, each poster was successful at accomplishing what they want but I think the last poster is the most encouraging in terms of attracting more people as it uses a range of different colours and the characters, especially the main one, is portrayed as being more accurate at showing the audience what the film is about. ?? ?? ?? ?? 1 ...read more.