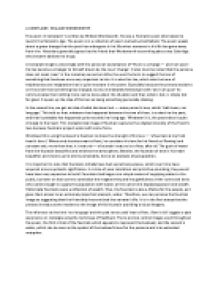 Analysis of 'A Complaint' by William Wordsworth.

Transfer-Encoding: chunked ﻿A COMPLAINT- WILLIAM WORDSWORTH The poem 'A Complaint' is written by William Wordsworth. He was a Romantic poet who helped to launch the Romantic Age. The poem is in a collection of poem named Lyrical Ballads. The poem speaks about a grave change that the poet has undergone in his life when someone in his life has gone away from him. Historians generally agree that the friend that Wordsworth was writing about was Coleridge who became addicted to drugs. A Complaint begins unnervingly with the persona's exclamation of 'There is a change ? and I am poor'. He has become a stranger to himself shown by the noun 'change'. It also must be noted that the persona does not mean 'poor' in the monetary sense but rather he uses the term to suggest the loss of something that has been once very important to him. It is also this line, which sets the tone of helplessness and resignation that is quite resonant in the poem. Especially because the persona exclaims on the onset that something has changed, but by immediately following it with 'and I am poor' he communicates that nothing more can be done about the situation and that, what is lost, is simply lost for good. It opens up the idea of this loss as being something personally shaking. ...read more.

There are two central images used throughout the poem, the first is that of the fountain which appears to represent the beloved; and the second is water, which can be seen as the symbol of the beloved's love for the persona and is an extended metaphor. Coleridge has never responded to Wordsworth's love as he has expected 'not taking heed'. The word 'bounty' demonstrates the deep powerful bond between them, but now it has become less demonstrative. The unrequited, unreciprocated love 'my need' leads the narrator to a sort of disappointment. In the second stanza, Wordsworth explores into the past bygone days. He states that 'what happy moments did I count! / Blest was I then all bliss above!', thus showing that the time he and the unspoken friend or lover has spent together are truly some of the happiest moments of his life. We do not know precisely what has happened between the poet and the poet's subject, but it seems as though their parting is slightly one-sided. It shows that there have been more than a few happy moments that live deeply within his heart, and then 'blest was I then all bliss above!' ? where he gives his happiness an almost divine quality. The second stanza is a recollection, realization, reflection, and comparison of the speaker's happiness in his friendship. ...read more.

Wordsworth employs punctuation to present the narrator's feelings towards his friend. The poet says 'a well of love ? it may be deep ?I trust it is ? and never dry'. The dashes and caesura here powerfully convey the distress and anxiety the narrator feels as he contemplates a life without this intense relationship and at the deterioration of the friendship. In the second bit, he reiterates the first few lines of A Complaint, thereby making it cyclical, begins with 'poor' and ends likewise, a process that, while not never-ending, can be said to repeat itself. Dishearteningly, it seems as though he's saying that love is fickle, and that people fall in and out of it with such ease that the sacredness of it is lost rather quickly. This could be written about both filial and romantic love. Regular rhyme scheme ABABCC captures the idea of the narrator's grief being inescapable; an idea supported by the poem's cyclic structure. Over the three stanzas and with a fixed rhyme scheme, the poem relates the narrator's regret over the chilling of a friendship or relationship. It is inescapable. Once there has been a powerful bond between them; now his friend is less demonstrative in showing his affection. This deeply saddens the narrator. The poem echoes Wordsworth's own concerns regarding his strained relationship with Coleridge. This strain has been due to Coleridge's altered character on returning from abroad after struggles from addiction. This is an autobiographical poem. ...read more.