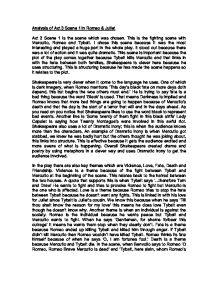 Analysis of Act 3 Scene 1 in Romeo & Juliet Act 3 Scene 1 is the scene which was chosen. This is the fighting scene with Mercutio, Romeo and Tybalt. I chose this scene because it was the most interesting and played a huge part in the whole play. It stood out because there was a lot of action and it was quite dramatic. This scene is important because the plot of the play comes together because Tybalt kills Mercutio and that links in with the hate between both families, Shakespeare is clever here because he uses structuring. This is structuring because he has made the scene happens so it relates to the plot. Shakespeare is very clever when it come to the language he uses. One of which is dark imagery, when Romeo mentions 'This day's black fate on more days doth depend, this but begins the woe others must end.' He is trying to say fate is a bad thing because the word 'Black' is used. That means Darkness is implied and Romeo knows that more bad things are going to happen because of Mercutio's death and that the day is the start of a terror that will end in the days ahead. As you read on you notice that Shakespeare likes to use the word black to represent bad events. ...read more.

Friendship is a theme because Mercutio sticks up for Romeo but when Mercutio dies, Romeo goes and gets revenge by killing Tybalt. Romeo says 'either thou or I, or both, must go with him' this means that either way one must die and that's how much of a friend he is to Mercutio. All the themes together make the scene work. Without one theme the play would be different. If violence was taken out, who would have died? The main characters in the scene are Romeo, Mercutio, Benvolio and Tybalt. From the scene Romeo seems to be the caring one, he doesn't want any fights. It shows this when he says 'I do protest, I never hurt thee' but when the fight goes on and Mercutio dies Romeo changes and wants revenge. This scene shows two sides of Romeo, peaceful and Revenge. Mercutio however is different. He is up for a fight and doesn't back down. He may be the serious one but he is very clever in the way he speak his words because he sometimes jokes around. When he says, 'Ask for me tomorrow, and you shall find me a grave man.' He means he will be in a grave but also he was a serious man. He is also up for a fight when necessary and also makes a joke about it when he talks to Tybalt. ...read more.

The laws of society back then are different to ours today because back then the boys were trained in sword fighting, they would challenge someone to fight, capital punishment and banishment was around. These days we don't use swords any more and if boys got trained to use weapons it could be dangerous. Capital Punishment is no longer used and neither is Banishment. The society is organized with the prince at the top and the two houses below. The aspects that seem weird to modern audience is when Juliet is only 13 and she is already getting married to some much older than her. The relevance that the scene has on a modern audience is that young men still cause conflict with each other. Tybalt protects Juliet because she's his cousin which still happens and young love between Romeo and Juliet when parents still don't approve. That's how Shakespeare's play is still effective in the modern time. In conclusion Shakespeare has used clever language, included a few themes, made the characters stand out and differ from one and other and created an interesting plot. He gets the audience involved by using dramatic irony and clever words. All the themes link together to make the scene and play to work out. The characters are all different so they stand out. The plot is important because without it there would be a big chunk missing. The scene is needed to make the play link together. Overall the scene is very important in the play. ...read more.