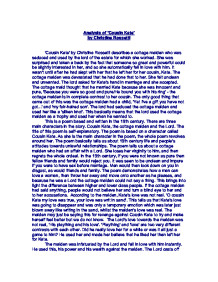 Analysis of 'Cousin Kate' by Christina Rossetti 'Cousin Kate' by Christina Rossetti describes a cottage maiden who was seduced and used by the lord of the estate for which she worked. She was surprised and taken a back by the fact that someone so great and powerful could be slightly interested in her, and so she automatically fell in love with him. It wasn't until after he had slept with her that he left her for her cousin, Kate. The cottage maiden was devastated that he had done that to her. She felt unclean and unwanted. The lord asked for Kate's hand in marriage and she accepted. The cottage maid thought that he married Kate because she was innocent and pure, 'Because you were so good and pure/He bound you with his ring' - the cottage maiden is in complete contrast to her cousin. The only good thing that came out of this was the cottage maiden had a child, 'Yet I've a gift you have not got...' and 'my fair-haired son'. The lord had seduced the cottage maiden and used her like a 'silken knot'. This basically means that the lord used the cottage maiden as a trophy and used her when he wanted to. This is a poem based and written in the 19th century. There are three main characters in the story. Cousin Kate, the cottage maiden and the Lord. The title of this poem is self-explanatory. The poem is based on a character called Cousin Kate. As she is the main character in the poem, the whole poem revolves around her. The poem basically tells us about 19th century life and people's attitudes towards unlawful relationships. The poem tells us about a cottage maiden who had an affair with a Lord. She loses her virginity to him, and then regrets the whole ordeal. In the 19th century, if you were not known as pure then fellow friends and family would reject you. ...read more.

Secondly, just two lines later, writes Rossetti, 'his plaything and his love'. This implies that he was just using her as his little toy, just for pleasure. He had no real feelings for her whatsoever. This is not a statement of a woman who is proud of what she has done. This is a clear indication that she is ashamed, but the biggest hint is yet to come. 'So now I moan, an unclean thing. Who might've been a dove'. She is looking back and thinking how things could have been so different. She wails and sobs at the thought of the direction that her life may have gone, if she hadn't got involved with the Lord. Now, no matter what she does, she is 'unclean' as she has had s*x before marriage. 'Who might've been a dove'. This the woman thinking about what it might have been. The poet uses a dove because they are considered to be something special that stands out from the crowd. It is also, more commonly, a symbol of peace and tranquility. It represents a free and peaceful life that she doesn't have anymore. Finally, Rossetti writes, 'if he had fooled not me but you.' The crucial word in this stanza is 'fooled'. The woman is not pleased with what she has done, she has been tricked into everything by the Lord. It is far from being romantic and it is, again, not the words of a woman who is proud of her actions. This also tells us alot about the character of the Lord. It implies he is an human being with no feelings towards others, intent only on doing what is best for himself. He is not worried about the feelings of the woman, as long as he has his enjoyment. The theme of this stanza is based on rejection and how the lord treats other women. ...read more.

You automatically expect the father to be roughly the same age as the mother, and I believe this is the case. All his wealth and riches highlights this, as I see no realistic way that a youngster could earn such a high amount of money. 'Your father would give lands for one, to wear his coronet.' If the Lord was youthful he wouldn't be worrying about heirs to his throne just yet so perhaps he is nearing the age that he won't be able to have another son and he is getting maybe a little desperate. The feelings of the cottage maiden help us to understand her character. The way she's put across to the reader makes us feel sorry for her and it gives us a clear image of how she felt. At first the mood of the poem is normal. As the poem progresses the anger and bitterness from the cottage maiden is starting to show and you begin to fully understand how she felt. There's a feeling of resentment and pure hatred towards the Lord and Kate. The main character also changes throughtout the poem. At first she starts off calm but further on she's not able to contain this calmness anymore and has an outburst of hatred towards the Lord - something that she's been trying to cover. The last stanza of the poem becomes more of revenge than hatred. She feels she's had revenge over the Lord and Kate by having a child - something that they're not likely to get. She sounds very self-satisfied. Christina Rossetti has written a very good portrayal of life in early times. It shows how society rejected woman who had unlawful s*x in earlier times; women were judges and disowned by all people who knew them. Society has now changed. Women are no longer judged or even looked down on by anyone. It has become a way of life that in earlier times may have been considered as dirty and unlawful, people's attitudes have changes and it is no longer as big a deal as it was in the early 19th century. ...read more.