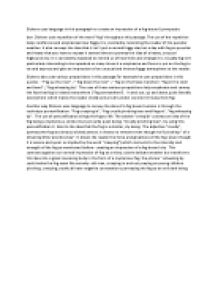 Analysis of Dickens' Description of Fog In London in &quot;Great Expectations&quot;.

Transfer-Encoding: chunked ﻿Dickens uses language in this paragraph to create an impression of a fog-bound Lonmpasise don. Dickens uses repetition of the word "fog" throughout this passage. The use of the repetition helps reinforces and emphasises how foggy it is, constantly reminding the reader of the peculiar weather. It also conveys the idea that it isn't just a normal foggy day but a day with fog so peculiar and heavy that you have to repeat it several times to portray the idea of a heavy, unusual fogbound city. It is constantly repeated to remind us of how thick and strange it is. ...read more.

The uses of these various prepositions help emphasise and convey the fact that fog is indeed everywhere ("fog everywhere"). In and out, up and down,quite literally everywhere which makes the reader vividly picture all London covered in heavy thick fog. Another way Dickens uses language to convey the idea of a fog bound London is through the technique personification. "Fog creeping in", "fog cruelly pinching toes and fingers", "fog wheezing by". The use of personification brings the fog to life. The adverb "creepily" conveys an idea of the fog being a mysterious, sinister but yet eerily quiet being. ...read more.

It shows the reader the force and greatness of the fog (even though it is serene and quiet as implied by the word "creeping") which connects to the intensity and strength of the fog as mentioned before- creating an impression of a fog bound city. This contrasts against our normal impression of fog as a misty, subtle delicate weather but transforms this idea into a great menacing bully in the form of a mysterious fog. the phrase " wheezing by could make the fog seem like acranky old man, creeping in and out preying on young children. pinching, creeping,cruelly all have negative connotations portraying the fog as an evil dark being. ...read more.