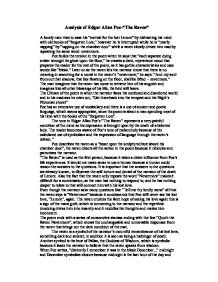 Analysis of Edgar Allan Poe-"The Raven" A lonely man tries to ease his "sorrow for the lost Lenore" by distracting his mind with old books of "forgotten Lore," however he is interrupted while he is "nearly napping" by "tapping on the chamber door" while a raven slowly drives him mad by repeating the same word: nevermore. Poe builds the tension in the poem when he says that "each separate dying ember wrought its ghost upon the floor," he creates a dark, mysterious mood that prepares the reader for the rest of the poem, as it has gothic characteristics and uses words like "bleak." Later on as the raven lets the narrator know that there is no meaning in searching for a moral in the raven's "nevermore," he says: "And my soul from out that shadow, that lies floating on the floor, shall be lifted - nevermore." ...read more.

" Poe describes the raven as a "beast upon the sculptured bust above his chamber door", the raven directs all the action in the poem because it ridicules and patronizes the narrator. "The Raven" is used as the first person, because it takes a direct influence from Poe's life experiences. It would not make sense to use a human because a human could reason the answers to the questions. It is important that the answers to the questions are already known, to illustrate the self-torture and denial of the narrator of the death of Lenore. Also the fact that the raven only repeats the word "Nevermore" makes it difficult for a conversation, as the man has nothing to respond to; and he has nothing deeper to relate to that will connect him with his lost love. Even though the narrator asks many questions like "Tell me thy lordly name" all that the raven says is "Nevermore" because it condescends that Poe will never see his lost love, "Lenore", again. ...read more.

The chamber signifies the narrator's loneliness and the sorrow he feels from the loss of Lenore. The room is richly furnished and reminds him of his lost love, however in contrast to the calmness in the chamber, the tempest outside is used to emphasise the mans isolation. Throughout the poem "The Raven", Poe portrays a personal h**l that he seems to go through. He uses haunting descriptions, " an uncomforting parallelism between his life and the poem, and startling yet purposeful exploration of symbolism and situation, makes the reader look into realms of insanity which explores the soul in which is enjoyable yet strange to the reader." Which means that it was the feelings of depression and madness that Poe felt during his life and the symbolism he uses to emphasise his situation which influenced and inspired him to write the poem "The Raven." ...read more.