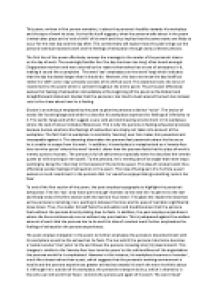 Analysis of &quot;End of shift&quot; by Desmond Sim.

﻿This poem, written in first person narration, is about the persona's hostility towards his workplace and the type of work he does. As the title itself suggests, what the persona talks about in the poem is what takes place at the 'end of shift' of his work and thus implies that the same events are likely to occur for the next day and the day after. This commentary will explore how the poet brings out the persona's attitude towards work and his feelings of exhaustion through various literary devices. The first line of the poem effectively conveys the message to the reader of the persona's stance on his day of work. The seemingly familiar line 'the day has been too long' often heard amongst Singaporean workers and even uttered by the readers themselves has a tone of annoyance in it, making it sound like a complaint. The word 'too' emphasizes on the word 'long' which indicates that the day has lasted longer than it should be. ...read more.

This daunting idea makes the persona feel pessimistic about his future as he is unable to escape from his work. In addition, his workplace is metaphorised as a 'twenty-four hour termite queen' where the word 'termite' shows how the persona feels that his place of work is merely a pest to humans. The persona is full of abhorrence especially when he describes the termite queen as 'still churning in her bowls'. To the persona, he is merely part of an organ that never stops working by doing the 'churning' in the bowels of the termite queen. This idea of constant work thus effectively evokes feelings of exhaustion in the poem. This idea of being part of a 'termite queen' evokes so much resentment in the persona that he 'would've enjoyed doing something rude in her face'. To end of the first section of the poem, the poet employs topography to highlight the persona's exhaustion. The line 'but i only have spirit enough' shortens to the next line 'to get me to the last' and finally ends of the first section with the last line 'bus home'. ...read more.

Although he is outside of his workplace, the persona's transport by bus, which is shared by 'a few who can still work their faces', reminds the persona yet again of his work. The word 'dead' mirrors the exhaustion of the workers and the words used to describe sound such as 'growling' and 'scowling' verbalise the inner unhappiness of the workers. In addition, the alliteration 'metal monster' on the letter 'm' creates a low murmuring sound that gives the idea of the workers softly grunting among themselves, thus allowing the reader to once again empathise with the persona's feelings. In conclusion, the poet employs various literary devices to evoke feelings of exhuastion in the poem and show the attitude of the persona towards his work. Through this poem, the poet questions whether what happens in the poem is merely the persona's individual experience or is a representation of the society in Singapore. The poet's message is that our society has sacrificed human emotions in pursuit of sophistication and this poem expresses his lamentation in knowing this. ...read more.