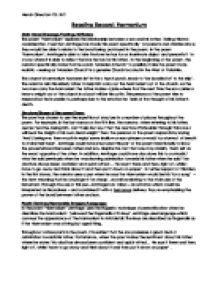 Analysis of &quot;Harmonium&quot; by Simon Armitage

Reading Record: Harmonium Main ideas/Message/Feelings/Attitudes: The poem 'Harmonium' explores the relationship between a son and his father. Taking this into consideration, I feel that Armitage has made this poem specifically for parents and children since they would be able to relate to the bond being portrayed in the poem. In the poem 'Harmonium', Armitage is able to take the love he has for an inanimate object and personify it in a way where it is able to reflect the love he has for his father. In the beginning of the poem, the narrator specifically states that he was in 'Marsden Church' to possibly make the poem more realistic - seeing as 'Marsden Church' is a genuine Church located in the West of Yorkshire. ...read more.

For example, in the last stanza on the fifth line, the narrator, when referring to his father, quotes 'And he, being him, can't help but say/ that the next box I'll shoulder through this nave/ will bear the freight of his own dead weight' then the persona of the poem responds by saying 'And I, being me, then mouth in reply/ some shallow or sorry phrase or word/ too starved of breath to make itself hear'. Armitage could have structured this part of the poem intentionally to show the powerful bond between father and son, despite the fact that one may classify them self as the exact opposite of the other. ...read more.

Poetic Devices/Memorable Imagery/Language: In the poem 'Harmonium' Armitage uses the linguistic technique of personification when he describes the harmonium: 'yellowed the fingernails of its keys'. Armitage uses language which conveys the appearance of the harmonium in vivid detail. The keys are described as fingernails as if the Harmonium was a living but aged thing. Throughout various parts in the poem, it is evident that the son possesses a great deal of admiration towards his father. For instance, when the poet makes the sentiment about his father where he states 'My dad has always been confident and quick witted... He says it there and then, right off, while I have to go away and think about it and then put it down on paper'. ?? ?? ?? ?? Henok Gheotom 10L En2 ...read more.