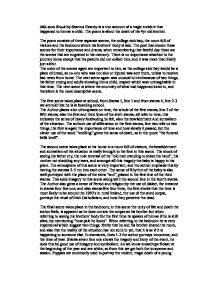 Mid-term Break by Seamus Heaney is a true account of a tragic incident that happened to him as a child. The poem is about the death of his 4yr old brother. The poem consists of three separate scenes, the college sick bay, the room full of visitors and the bedroom where his brothers' body is laid. The poet has chosen these scenes for their importance and drama, when remembering that fateful day these are the scenes that are engraved in his memory. There is no importance attached to the journey home except that his parents did not collect him, and it was more than likely just a blur. The order of the scenes again are important to him, as the college sick bay would be a place of dread, as no-one who was not sick or injured was sent there, unless to receive bad news from home. The next scene again was unusual to him because of two things, his father crying and adults showing him a child, respect which was unimaginable in that time. ...read more.

This adds imagery to this scene along with the second line in the fourth stanza. The Author also gives a sense of Period and religion by the use of dialect, for instance in stanza four line one, and also stanza five line three, the first shows that the time is most likely to be around the 1950's in rural Ireland, the use of the word corpse, portrays the ritual of Irish Catholicism, and how they perceive the dead. The final scene takes place in the bedroom; in this scene the unity of life and death the author feels, is apparent as he does not see the corpse as his brother but when referring to seeing his brothers' body for the first time he speaks of him as if he is still alive, by mentioning "how pale he looks". When referring to the bedroom he is very impersonal which suggest two things; firstly that he and his brother shared the room, and also that the reality of the situation has not sunk in yet, that it is as if it is happening to someone else. ...read more.

It is plain to see that the adults in the poem understand what has happened, where as the author, a child at the time of the tragedy does not comprehend the severity of the situation, and is more concerned with what is happening to him than the death of his brother. The loss that the adults feel is shown very clearly by; his father crying, the old men shaking his hand and giving him their condolences, the whispering strangers and his mothers "angry tearless sighs" whereas the author himself shows no signs of the loss he has suffered, this is shown in the embarrassment he feels at the old men standing to shake his hand, and also when in the bedroom he sees the corpse but does not associate it with his brother. He does not realise until the very end of the poem that he will never again see or play with his brother. This is due to his age; because he is so young he has no concept of death. ...read more.