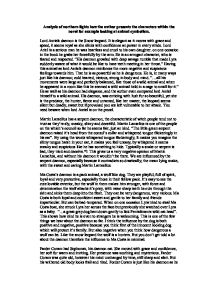 Analysis of &quot;Northern Lights&quot; how Philip Pullman presents the characters within the novel for example looking at animal symbolism

Analysis of northern lights how the author presents the characters within the novel for example looking at animal symbolism. Lord Asriels daemon is the Snow leopard. It is elegant as it moves with grace and speed, it seems royal as she slinks with confidence an power in every stride. Lord Ariel is a serious man he was heartless and cruel to his own daughter. on one occasion in the book he grabs her forcefully by the arm. He is an arrogant character, who is feared and respected. "His daemon growled with deep savage rumble that made Lyra suddenly aware of what it would be like to have teeth meeting in her throat." Having this animal as lord Asriels daemon reinforces the more negative and suspicious feelings towards him. That he is as powerful as he is dangerous. He is, in many ways just like his daemon; cold hearted, vicious, strong in body and mind. ...read more.

By using the words whispered tongue flickeringly, It makes you imagine the slimy tongue harsh in your ear, it makes you feel uneasy, by whispered it seems sneaky and suspicious like he has something to hide. Typically a snake or serpent is bad, they trick and deceive.*1 This gives us a very negative opinion of Martin Lanseluis, and without his daemon it wouldn't be there. We are influenced by the serpent daemon, especially because it contradicts so drastically; the mean lying snake, with the sweet and caring Martin Larnselius. Ma Costa's daemon is a pack animal, a wolf like dog. They are playful, full of spirit, loyal and very protective, especially those in their fellow pack. It's easy to see the cute lovable exterior, but the wolf in them makes him stronger, with force and determination the wolf attacks it's prey, with razor sharp teeth he cuts through the skin and sinks them deep into the flesh. ...read more.

But his withered old body looks frail and tired. Forder Coram is just like his daemon as he is confident wise, but with an air of mystery like he's not giving anything away. Even though you don't know him he seems friendly like he's known you for years "Sophonax...was golden eyed, and elegant beyond measure, fully twice as large as a real cat, and richly furred." This emphasizes the appeal and makes the cat seem heavenly, like it's magnificent and extraordinary. I think the daemon gives us an even more positive opinion of Farder Coram. "He could not walk without leaning on two sticks and he trembled constantly like an aspen leaf. His mind was sharp and clear he was a powerful man". This shows how weak he looked, but how strong minded he was. By having this unique cat makes me think that when Farder Coram was younger he was lively an adventure. But still he was every bit as admired, and was adventurous on the inside. ...read more.