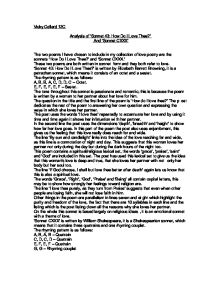 Analysis of 'Sonnet 43: How Do I Love Thee?' by Elizabeth Barrett Browning.

Vicky Collard 12C Analysis of 'Sonnet 43: How Do I Love Thee?' And 'Sonnet CXXX' The two poems I have chosen to include in my collection of love poetry are the sonnets 'How Do I Love Thee?' and 'Sonnet CXXX.' These two poems are both written in sonnet form and they both refer to love. 'Sonnet 43: How Do I Love Thee?' is written by Elizabeth Barrett Browning, it is a petrachan sonnet, which means it consists of an octet and a sestet. The rhyming pattern is as follows: A, B, B, A, C, D, D, C - Octet. E, F, E, F, E, F - Sestet. The tone throughout this sonnet is passionate and romantic; this is because the poem is written by a woman to her partner about her love for him. The question in the title and the first line of the poem is 'How do I love thee?' The poet dedicates the rest of the poem to answering her own question and expressing the ways in which she loves her partner. The poet uses the words 'I love thee' repeatedly to accentuate her love and by using it time and time again it shows her infatuation with her partner. ...read more.

'Sonnet CXXX' is written by William Shakespeare, it is a Shakespearian sonnet, which means that it contains three quatrains and one rhyming couplet. The rhyming pattern is as follows: A, B, A, B - Quatrain C, D, C, D - Quatrain E, F, E, F - Quatrain G, G - Rhyming couplet The tone in this poem is ordinary/undramatic; it is similar to the tone of a normal conversation. This poem is written by a man directly to the reader, the poet is explaining of all the defaults of his mistress but still acknowledges the fact that he loves her. In the first quatrain the poet describes the mistress' appearance, he does this by the use of colours. 'Currall is farre more red, than her lips red' is an example of this. The description of her appearance is a metaphorical device as it creates an image of the lady's appearance; in this quatrain another metaphorical device is also used. When the poet uses the words 'nothing like the Sunne' he is inverting the idea of a simile, he is deliberately trying not to use a simile, as this is what most sonnets contain. The usual sonnet would say 'My mistress eyes are like the Sunne.' ...read more.

Other things in this poem are parallelism and the fact that there are 10 syllables in each line. Evaluation Both poems refer to love although 'Sonnet 43: How Do I Love Thee?' uses the word love many more times than 'Sonnet CXXX.' It is as if in 'Sonnet CXXX' that the word love is more sacred and should not be used repeatedly as this would ruin all meaning of the word. The two poems are both sonnets and contain parallelism, rhyming patterns and refer to love. The main difference between the poems is that one is written by a man and another by a woman, both poems were also written in different centuries. 'Sonnet CXXX' was written in the 16th-17th century and is therefore written in old English, whereas 'Sonnet 43' was written in the 19th century and was written mainly in modern English, with an exception for the word 'thee.' I feel that the poets being of different genders makes a difference as woman tend to be more emotional and affectionate, whereas men tend to be more malicious. This shows in the poems as the woman has written 'Sonnet 43' and this poem writes of perfection, beauty and devotion. A man has written 'Sonnet CXXX' and this poet has written of imperfection and flaws. ...read more.