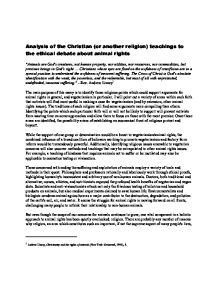 Analysis of the Christian (or another religion) teachings to the ethical debate about animal rights "Animals are God's creatures, not human property, nor utilities, nor resources, nor commodities, but precious beings in God's sight. ... Christians whose eyes are fixed on the awfulness of crucifixion are in a special position to understand the awfulness of innocent suffering. The Cross of Christ is God's absolute identification with the weak, the powerless, and the vulnerable, but most of all with unprotected, undefended, innocent suffering." --Rev. Andrew Linzey1 The main purpose of this essay is to identify those religious points which could support arguments for animal rights in general, and vegetarianism in particular. I will point out a variety of areas within each faith that activists will find most useful in making a case for vegetarianism (and by extension, other animal rights issues). The traditions of each religion will find some arguments more compelling than others. Identifying the points which each particular faith will or will not be likely to support will prevent activists from wasting time on some approaches and allow them to focus on those with the most promise. Once these areas are identified, the possibility arises of establishing an ecumenical front of religious protest and boycott. While the support of one group or denomination would be a boost to vegetarianism/animal rights, the combined influence of a broad coalition of believers working to promote vegetarianism and factory farm reform would be tremendously powerful. Additionally, identifying religious issues amenable to vegetarian concerns will also uncover methods and teachings that may be extrapolated to other animal rights issues. For example, a teaching of kindness that requires animals not to suffer or be mutilated may also be applicable to cosmetics testing or vivisection. Those concerned with ending the suffering and exploitation of animals employ a variety of tools and methods in their quest. Philosophers and professors rationally and laboriously work through ethical proofs, highlighting humanity's inconsistent and arbitrary use of non-human animals. ...read more.

Amen."8-- Saint Francis of Assisi. Since Christianity has its roots in Judaism and the writings of the Torah, activists can employ some of the Jewish arguments for vegetarianism in the discussion of Christianity. For instance, Christians might also be led to see Genesis 1:29 as a signpost of God's wish for humans to be vegetarians, or more properly, vegans. Both religions also envision the peaceable kingdom of Isaiah 11:6-9, though the details may differ in each case. While these points of congruence are important, there are some substantial differences that require activists to approach Christianity differently than they approach Judaism. Foremost among these considerations is the figure of Jesus Christ. The teachings and deeds of Jesus are the essence of Christianity and will play a central role in determining Christian attitudes towards animals. Animal rights thinkers have addressed this issue in the past. Most often they make the case that Jesus was a vegetarian, implying all Christians should be also. While the vegetarian movement would certainly reap great benefits were it to be proven Jesus was a vegetarian, resting the entire impetus for vegetarianism on Jesus' actions could prove disastrous. This is especially true because, contrary to the claims of some, the historical evidence of a vegetarian Jesus is very slim. Some of those who push for a vegetarian Jesus point to the New Testament for support. They claim the Bible records no incidents of Jesus eating meat or flesh of any kind, aside from possibly eating fish on two occasions (John 21:13, Luke 24:43) after his resurrection and maybe during the Last Supper (Mark 14:12). Others argue that Jesus' original teaching of kindness to animals were excised at the Council of Nicaea, where Constantine and his bishops dropped the ideas to appeal to pagan converts and to satisfy their own taste for flesh. Another line of thinking places Jesus as a member of one of the Jewish ascetic sects, usually the Essenes, who were strict vegetarians. ...read more.

This is bound to be a difficult and expensive goal to achieve; activists should continue to promote the simple, positive ways that a vegetarian or vegan diet would allow these believers to scrupulously follow their religious teachings. And it seems all three faiths share enough common ground on issues of the environment and concern for the oppressed that united pressure could be directed at the abolition or drastic reworking of agribusiness and the factory farm. Likewise, common concerns for human health could prompt interfaith exploration of health-promoting, life-sustaining dietary choices. Religious arguments for vegetarianism or animal rights will not be successful all of the time. Activists should not suddenly expect to convert every Muslim, Christian, or Jew they meet to vegetarianism. But as activists increase their knowledge of religious views on animal kindness and as believers become exposed to these traditions, more modest goals should be seen. Even the seemingly minor step of cutting down one's flesh consumption or buying non-factory farmed meat will realise great cumulative results in the numbers of animals spared death or a miserable existence. In the effort to save the animals, it is imperative for activists take every step and reach out to every ally that becomes available. With so much at stake and so far to go, even the small victories are essential. The Garden of Eden, God's perfect world, was vegetarian (Gen. 1:29-30). Immediately, God calls this ideal and non-exploitative relationship "good" (Gen. 1:31). There follow many years of fallen humanity, when people held slaves, waged war, ate animals and committed various other violent acts. But the prophets tell us that the peaceable kingdom will be nonviolent and vegetarian; even the lion will lie down with the lamb (Isaiah 11). Jesus is the Prince of Peace, who ushers in this new age of nonviolence. WhenChristians pray, "Your will be done, on Earth as it is in heaven," the one prayer given to us by Jesus, this obligates us to change our lives, to make choices that are as merciful and loving as possible. There will be no factory farms and slaughterhouses in heaven. ...read more.