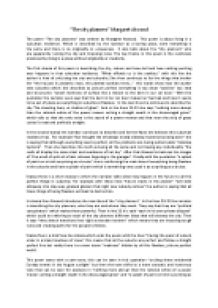 ﻿?The city planners? Margaret Atwood The poem ?The city planners? was written by Margaret Atwood. This poem is about living in a suburban residence. Which is described by the narrator as a boring place, were everything is the same and there is no originality or uniqueness. It also talks about the ?city planners? who are apparently ruining the city and imposing rules. The key theme in this poem is the numbness produced by living in a place without originality or creativity. The first stanza of this poem is describing the city, nature and how dull and how nothing exciting ever happens in that suburban residence. ?What offends us is the sanities:? with this line the author is kind of criticising the city and suburbia. She then continues to list the things that bother her ?the houses in pedantic rows, the planted sanitary trees?? this words show how the author sees suburbia which she describes as picture perfect everything is too clean ?sanities? too neat and structured. ...read more.

For example with these lines ?future cracks in the plaster? ?will slide obliquely into clay seas, gradual glaciers that right now nobody notices? the author is saying that all these things of being flawless will lead to destruction. In stanza four Atwood introduces the new idea of the ?city planners?. In the lines 29-32 the narrator is describing the city planners, who they are and where they work. They say that they are ?political conspirators? which makes them powerful. Then in line 33 it is said ?each in his own private blizzard? which could be referring to each of the city planners different ideas that will destroy the city. Then it says ?they sketch transitory lines rigid as wooden borders? which means they are imposing tough rules and creating paths for the people to follow. Stanza five is a brief two line stanza which ends the poem with the lines ?tracing the panic of suburb order in a bland madness of snow? this means that all the suburbs are perfect and follow a straight perfect line but really there is a snow storm ?madness? hidden by all this flawless, picture perfect world. ...read more.

This poem can be linked with the poem by Boey Kin Cheng ?The Planners?. Both of these poems talk about similar themes which are the suburban and perfect cities and nature for example in ?The city planners? Atwood describes the ?planted sanitary trees? ?the discouraged grass? and in ?The planners? Cheng talk about ?the seas draw back? and ?the skies surrender?. Also both poems talk about people that ?plan? or control the cities. So in conclusion this poem is transmitting a feeling of anxiety, concern and unease as it talks about the destruction and madness there really is in the world although some people ?the city planners? try to cover it and live hiding the truth of this world of perfection and flawlessness. I think the poem is successful as it is transmitting its subtexts which are the dullness and flatness of this world which soon will be destroyed in a pretty clear way and I think that is what Margaret Atwood was trying to transmit through this poem. ...read more.