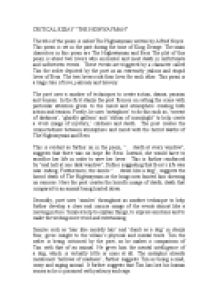 ﻿CRITICAL ESSAY ?THE HIGHWAYMAN? The title of the poem is called The Highwayman written by Alfred Noyes. This poem is set in the past during the time of King George. The main characters in this poem are The Highwayman and Bess The plot of this poem is about two lovers who encounter and meet death in unfortunate and unforeseen events. These events are triggered by a character called Tim the ostler depicted by the poet as an extremely jealous and stupid lover of Bess. The two lovers risk their lives for each other. This poem is a tragic tale of love, jealousy and bravery. The poet uses a number of techniques to create action, drama, passion and tension. In the first stanza the poet focuses on setting the scene with particular attention given to the mood and atmosphere creating both action and tension. Firstly, he uses ?metaphors? to do this such as, ?torrent of darkness?, ?ghostly galleon? and ?ribbon of moonlight? to help create a vivid image of mystery,? coldness and death. The poet creates the connectedness between atmosphere and mood with the horrid deaths of The Highwayman and Bess. This is evident as further on in the poem, ?? death at every window?, suggests that there was no hope for Bess. ...read more.

The poet further helps us take on each of the characters in role making us see their perspective more clearly. This helps the reader to make up their own decisions about each of the characters. In the end, The Highwayman lived a violent life and died a violent death which he deserves. Also because of him the landlord?s daughter had an unfortunate violent death too. They had love for each other and because of Bess?s loyalty to The Highwayman, she sacrificed her own life. The repeating stanzas at end gives the reader the sense that although their lives have ended horridly their love lives on forever. Notes notes notes Another technique the poet uses is his choice of adjectives such as ?gusty trees?, ?cloudy seas? and ?purple moor? adding effective detail to imagery. He also makes reference to ?frosty silence? and ?echoing night? The poet continues to use metaphors throughout the poem. In stanza four, ?his eyes were hollows of madness? and ?the road was a gypsy?s ribbon?? in the seventh stanza continues to maintain a sense of suspense and thrill. The repeated use of the word ?moonlight? throughout plays a significance part to linking not only with the atmosphere, mood or setting the scene but also with death and sorrow. These seem to be intertwined. ...read more.