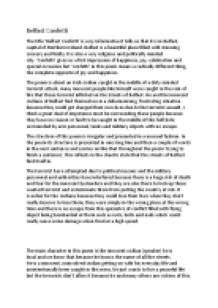 Analysis of the poem Belfast Confetti

﻿Belfast Confetti The title ?Belfast Confetti? is very informative it tells us that it is in Belfast, capital of Northern Ireland. Belfast is a beautiful place filled with stunning scenery and fields; it is also a very religious and politically minded city. ?Confetti? gives us a first impression of happiness, joy, celebration and special occasions but ?confetti? in this poem means a radically different thing, the complete opposite of joy and happiness. The poem is about an Irish civilian caught in the middle of a dirty minded terrorist attack, many innocent people like himself were caught in the rain of fire that these terrorist inflicted on the streets of Belfast. He and the innocent civilians of Belfast find themselves in a dehumanising, frustrating situation because they could get charged their own ...read more.

The terrorist have attempted due to political reasons and the military personnel and authorities have interfered because there is a huge risk of death and fear for the innocent bystanders and they are also there to lock up these wanted terrorist and exterminate them from putting the country at risk. It is unfair for the civilians because they could lose their lives when they don?t really deserve to lose them; they were simply in the wrong place at the wrong time and there is no escape from this epicentre of conflict filled with flying object being bombarded at them such as nuts, bolts and nails which could really cause some damage when fired at a high speed. ...read more.

The terrorist just want to do as much damage as they want and destroy. The authorities are also being very intimidating by bombarding these shocked and scared people with questions. The poet is very clever in the way he uses his techniques of words to marry the significance of the poem and the way he is showing us when we read it. For example he uses punctuation to show the conflict that is happening in the poem, the poem also shows a paragraph with no punctuation, this is confusing just like the poem itself ?Belfast is like a paragraph with no punctuation?. He also uses the names of streets which are named after famous battles and wars. He uses words like labyrinth representing that there is no way out or if there is a way its very complicated to escape. ...read more.