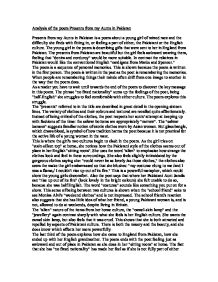 Analysis of the poem Presents from my Aunts in Pakistan

Analysis of the poem Presents from my Aunts in Pakistan Presents from my Aunts in Pakistan is a poem about a young girl of mixed race and the difficulty she finds with fitting in, or feeling a part of either, the Pakistani or the English culture. The young girl in the poem is describing gifts that were sent to her in England from Pakistan. The presents from Pakistan are beautiful but the girl feels awkward wearing them, feeling that "denim and corduroy" would be more suitable. In contrast the relatives in Pakistan would like the conventional English "cardigans from Marks and Spencer." The poem is a sequence of personal memories. This is shown because the poem is written in the first person. The poem is written in the past as the poet is remembering the memories. When people are remembering things their minds often drift from one image to another in the way that the poem does. As a reader you have to wait until towards the end of the poem to discover the key message in this poem. ...read more.

She also feels slightly intimidated by the gorgeous clothes saying she: "could never be as lovely /as those clothes," the clothes also seem the make the girl embarrassed so that she blushes: "my costume clung to me /and I was a flame,/ I couldn't rise up out of its fire." This is a powerful metaphor, which could show the young girls discomfort. Also the poet says that where her Pakistani Aunt Jamila can "rise up out of its fire" (look lovely in the bright colours) she felt unable to do so, because she was half English. The word "costume" sounds like something you put on for a show. This sense of being between two cultures is shown when the "school friend" asks to see Moniza Alvi's "weekend clothes" and is not impressed. The school friend's reaction also suggests that she has little idea of what her friend, a young Pakistani woman is, and is not, allowed to do at weekends, despite living in Britain. The "alien" nature of the items from her home culture, the "camel-skin lamp" and the "jewellery" again contrast sharply with what she feels is her English culture. ...read more.

This creates a slightly unsettled, fluid feel to the poem, reflecting the poet's feelings about her identity. The use of the free verse effect in this poem helps to portray her sincerity in her words, she tells it how it is and such is the structure of the poem. The lack of any particular rhythm or rhyming scheme within the poem helps to show the idea that there is no set course in her life, no specific direction she is going, it is unpredictable. In conclusion it would seem the poet has great difficulty finding a 'niche' between either of the cultures in which she will feel comfortable. Living within the English culture whilst having so much of her Pakistani culture as part of her history and main nationality, the presents from her aunts acting as reminders and complications, she finds them to be beautiful and extravagant yet awkward and uncomfortable. This proves to be a major complication for her, she is upset she cannot 'fit-in' with the 'ordinary' life style of someone living in England. ...read more.