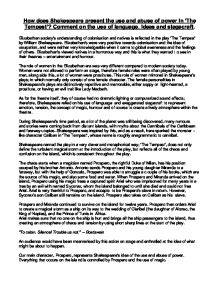 Analysis of 'The Tempest'

How does Shakespeare present the use and abuse of power in 'The Tempest'? Comment on the use of language, ideas and stagecraft. Elizabethan society's understanding of colonisation and natives is reflected in the play 'The Tempest' by William Shakespeare. Elizabethan's were very positive towards colonisation and the idea of usurpation, and were neither very knowledgeable when it came to global awareness and the feelings of others. Elizabethan's viewed natives in a humorous way and this is what they wanted to see in their theatres - entertainment and humour. The role of women in the Elizabethan era was very different compared to modern society today. Women were not allowed to perform on stage, therefore female roles were often played by young men, along side this, a lot of women were prostitutes. This role of women mirrored in Shakespeare's plays; in which normally only consist of one female character. The female personalities in Shakespeare's plays are distinctively repetitive and memorable, either soppy or light-hearted, a prostitute, or having an evil trait like Lady Macbeth. As for the theatre itself, they of course had no dramatic lighting or computerized sound effects; therefore, Shakespeare relied on his use of language and exaggerated stagecraft to represent emotion, tension, the concept of magic, humour and of course to create a lively atmosphere within the theatre. During Shakespeare's time period, as a lot of the planet was still being discovered, many rumours and stories were coming back from distant islands, with myths about the Cannibals of the Caribbean and faraway utopias. ...read more.

- Prospero The play expresses the idea that it was not only Ariel and Caliban who were imprisoned on the island as slaves to Prospero, but Prospero himself and his daughter Miranda who are also imprisoned on the island, as a result of Antonio. Because of Prospero's powerful impact on the island when he was sent there, Caliban thinks the island should belong to him, because the island previously belonged to his mother Sycorax. "This island's mine by Sycorax my mother, which thou tak'st from me" - Caliban However Prospero thinks differently. Prospero, having had his brother take away his dukedom, then takes the island away from Caliban and enslaved him and Ariel. This showers the island's representation of colonisation and the colonists in America at the time the play was being written, and also Prospero's hypocritical behaviour and his want to be in control. Prospero uses his position in power and abuses this power against Caliban to control him, and constantly reminds Caliban of how much he has attempted to help him but he has declined the offer. These powerful speeches from Prospero make Caliban feel inferior. "As I told thee before, I am subject to a tyrant; a sorcerer, that by his cunning hath cheated me of the island" - Caliban In this quote, Caliban is reminding Stephano that he is enslaved by Prospero, by which he calls a 'tyrant'. He then mentions Prospero stealing the island from him. ...read more.

"Like winter's drops from eaves of reeds" - Ariel Harder letters such as 'T', 'N', and 'D' to create a violent and aggressive atmosphere. Additionally, Shakespeare always uses rhythm in all his plays, not unlike poetry. Bursts of alliteration are also often used in Shakespeare's language. "To-night though shalt have cramps, side-stitches that shall pen thy breath up;" - Prospero Thus building up an atmosphere of either tension and drama or romantic and calm. Conversations between Prospero and Caliban tend to use the repetitive hard sounding letters, as their conversations are a lot more aggressive and insulting, to create the image of a violent relationship. Yet, Ariel and Prospero's conversations are entirely different. Using sweeping metaphors and words containing soft sounding letters. This contrast in linguistic devices draws in the audience's interest. Prospero uses lots of contrasts in sounds and assertive language when using his power and abusing it. This creates tension. He always wants everyone to know that he is the one in control via his magic to confuse people and create chaos. Caliban's language when he is talking to Prospero is very arrogant, angry and violent. "With raven's feather from unwholesome fen drop on you both! A south-west blow on ye and blister you all o'er!" - Caliban Although, his language is very different when he is talking to Stephano. The language he uses is very sycophantic and flattering. "How does thy honour? Let me lick thy shoe." - Caliban The magical language is created by using words which open the imagination to art and power, using fiery words, often portrayed by Ariel. ...read more.