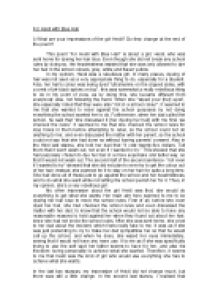 Analysis on the poem &quot;For Heidi with Blue Hair&quot;

﻿For Heidi with Blue Hair i) What are your impressions of the girl Heidi? Do they change at the end of the poem? This poem "For Heidi with Blue Hair" is about a girl, Heidi, who was sent home for dyeing her hair blue. Even though she did not break any school rules by doing so, the headmistress insisted that she was only allowed to dye her hair in the school colours, grey, white and flaxen yellow. In my opinion, Heidi was a rebellious girl. In many places, dyeing of hair was not seen as a very appropriate thing to do, especially for a student. Also, her hair's colour was being dyed "ultramarine on the clipped sides, with a crest of jet-black spikes on top", this was somewhat a really rebellious thing to do in my point of view, as by doing this, she became different from everybody else, not following the trend. When she "wiped your [her] eyes", she especially noted that they were also "not in a school colour". It seemed to me that she wanted to rebel against the school purposely by not doing everything the school wanted her to do. ...read more.

It was as if she was just pretending to cry to make her dad sympathise her so that he would call up the school, and when he does, she wiped her eyes immediately, seeing that it would not have any more use. It to me as if she was specifically trying to use the soft spot her father seems to have for her, and also his freedom- loving personality to achieve what she wanted. Therefore, it seems to me that Heidi was the kind of girl who would use everything she has to achieve what she wants. In the last two stanzas, my impression of Heidi did not change much, but there was still a little change. In the second last stanza, I realised that Heidi did not have a mother, and I started to pity her. I thought that maybe growing up without a female influence was why she had grown to be so rebellious. I also thought that she might not have always been like this, but her mother's death had left her heart-broken and resulting in her turning rebellious. However, when she mentioned that "It was unfair to mention your [her] mother's death, but that shimmered behind the arguments". ...read more.

In the second stanza, the headmistress noted that "although dyed hair was not specifically forbidden, yours [Heidi's] was apart from anything else, not done in the school colour." This showed that Heidi's school wanted the students to do follow the school's fashion in everything they do and to be uniformed. Also, the poet phrased the sentence as "as the headmistress put it", by phrasing it this way instead of "the headmistress said", it gives the reader a sense that the headmistress saying something unreasonable and that she was trying to cover the loophole in the school rules such that Heidi's blue hair would not be allowed. Furthermore, in the second last stanza, the poet mentioned the "The school had nothing else against you [Heidi]; teachers twittered and give in". This seemed that when all the reasons were for Heidi and that the school could not find any more reasons to punish Heidi for, the teachers still "twittered" about it, not wanting to give in. The teachers still discussed about the incident when it was all very clear that they could not do anything to Heidi. Therefore, I felt that the poet's attitude towards the school system was that it was rigid and inflexible and that she did not approve of this kind of school system. ...read more.