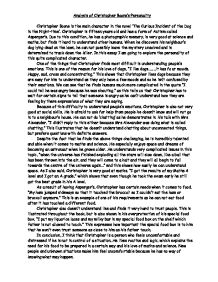 Analysis of Christopher Boone's Personality Christopher Boone is the main character in the novel 'The Curious Incident of the Dog in the Night-time'. Christopher is fifteen years old and has a form of Autism called Asperger's. Due to this condition, he has a photographic memory, is very good at science and maths, but finds it hard to understand other humans. When he discovers his neighbour's dog lying dead on the lawn, he can not possibly leave the mystery unsolved and is determined to track down the killer. In this essay I am going to explore the personality of this quite complicated character. One of the things that Christopher finds most difficult is understanding people's emotions. ...read more.

He can not do 'chatting' as he demonstrates in his talk with Mrs Alexander. "I didn't reply to this either because Mrs Alexander was doing what is called chatting." This illustrates that he doesn't understand chatting about unconnected things, but prefers questions with definite answers. Despite the fact that he finds the above things challenging, he is incredibly talented and able when it comes to maths and science. He especially enjoys space and dreams of becoming an astronaut when he grows older. He understands very complicated issues in this topic, "when the universe has finished exploding all the stars will slow down, like a ball that has been thrown into the air, and they will come to a halt and they will all begin to fall towards the centre of the universe again..." ...read more.

This is illustrated throughout the book, but is also shown in his overprotection of his special food box. "I put my liquorice laces and my milky bar in my special food box on the shelf which Father is not allowed to touch." This expresses how important the special food box is to him that he won't even trust someone as close to him as his father touch. In conclusion, I think that Christopher is a person who feels uncomfortable and distressed if he is not in control of a situation. He likes routine and logic, which explains the need for his food to be prepared in a certain way and his love of maths and science. New people and unknown situations make him feel uncomfortable because he has no way of knowing what may happen. ?? ?? ?? ?? ...read more.