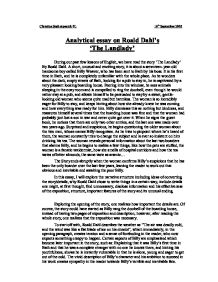 Christina Sophonpanich 9L 16th September 2003 Analytical essay on Roald Dahl's 'The Landlady' During our past few lessons of English, we have read the story 'The Landlady' By Roald Dahl. A short, unusual and exciting story, it is about a seventeen-year-old handsome boy called Billy Weaver, who has been sent to Bath by his boss. It is his first time in Bath, and he is completely unfamiliar with the whole place. As he wonders about the dark, empty streets of Bath, looking for a pub to stay in, he is captivated by a very pleasant looking boarding house. Peering into the window, he sees animals sleeping in the cozy room and is compelled to ring the doorbell, even though he would rather stay at a pub, and allows himself to be persuaded to stay by a sweet, gentle-looking old woman who seems quite mad but harmless. The woman is so incredibly eager for Billy to stay, and keeps hinting about how she already knew he was coming and how everything was ready for him. Billy dismisses this as nothing but kindness, and reassures himself several times that the boarding house was fine and that the woman had probably just lost a son in war and never quite got over it. When he signs the guest book, he notices that there are only two other entries, and the last one was made over two years ago. ...read more.

Another hint in the story is the way the woman describes the other two boarders in such personal detail that makes her appear slightly perverted and twisted. Near the end, tells Billy how "there wasn't a blemish on his body" (referring to Mr. Temple) "His skin was just like a Baby's" If the woman had described her customers to Billy when he first entered the boarding house, Billy would have been put off and probably left. How an old woman like her would know exactly what her customer's skin looked like on his body seems too obvious to reveal in the beginning. A last example is that the Landlady is a taxidermist. The sight of the animals "sleeping" in the living room by the hearth is what catches Billy's eye the most. Using the fact that he sees animals appearing well treated, he ironically, naively assures himself that "animals were always a good sign in a place like this". If Billy had known from the beginning that the animals were dead yet still on display, and that the woman's hobby was stuffing "all her pets", Billy would have been suspicious of the woman's sanity and her sinister intentions right away and would most likely NOT have wanted to stay in a place with a fanatical taxidermist's collection of dead pets. ...read more.

But it does not really matter as the fact that he even mentions the strange taste must mean that there is a strange substance in the tea, therefore we automatically assume that it has been poisoned, and knowing this, means he is too late to be saved. The story is a cliffhanger, ending abruptly. This is effective for this type of novel as it has been building up all this tension throughout the story, and leaves the reader right at the cliffhanger, which makes the reader think highly of this exciting and unusual story. By this stage, the reader has no doubt that Billy will die at the hands of the psychotic old woman, and the fact that the story can truly end in the readers mind is so much more effective, creating a gloomy sense of inevitability for Billy's fate. To finish off, I would just like to say that I enjoyed 'The Landlady" greatly and that I found it a very well thought of plot. The story was short, and perhaps the story line in itself was not even that interesting, but Roald Dahl's ability to make it exciting and unusual turns it into an effective story, proving that Roald Dahl's knowledge of when to include certain details and when to disclose information and how to set out a very clever plot, makes him an effective story-teller. Christina Sophonpanich 9L Analytical essay on Roald Dahl's 'The Landlady' Page 4 of 4 ...read more.