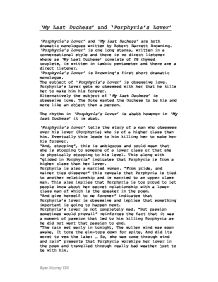 "And give herself to me forever" indicates that Porphyria's lover is obsessive and implies that something important is going to happen next. Porphyria's lover is not completely mad. "But passion sometimes would prevail" reinforces the fact that it was a moment of passion that led to him killing Porphyria as he did not want that passion to end. "The rain set early in tonight, The sullen wind was soon awake, It tore the elm-tops down for spite, And did its worst to vex the lake: ... So, she was come through wind and rain" presents that Porphyria worships her lover in the poem and travelled through really bad weather just to be with him. After Porphyria's lover kills her he beliefs that her has not committed a sin in Gods eyes. "And yet God has not said a word!" ...read more.

that pictured countenance". This illustrated the fact that he see's his wife as beautiful now but didn't when she was alive due to the fact that he believed she was sleeping with other men. "Twas not her husbands presence only, called that spot of joy into the duchesses cheek... she thanked men", this exposes the fact that the Duke did not trust the Duchess when she was alive and believed she was being disloyal. The Duke was annoyed and angry that she was supposedly being disloyal to him and therefore hired someone to kill her. "This grew; I gave commands; then all smiles stopped together". This reinforces that the Duke killed the Duchess and that he gave commands as he chooses never to stoop. ?? ?? ?? ?? Ryan Murray 12E ...read more.