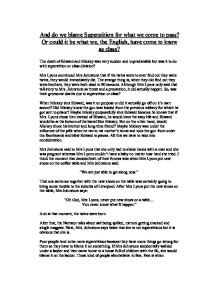 And do we blame Superstition for what we come to pass? Or could it be what we, the English, have come to know as class?

And do we blame Superstition for what we come to pass? Or could it be what we, the English, have come to know as class? The death of Edward and Mickey was very sudden and unpredictable but was it to do with superstition or class division? Mrs Lyons convinced Mrs Johnstone that if the twins were to ever find out they were twins, they would immediately die. The strange thing is, when they did find out they were brothers, they were both dead in 90 seconds. Although Mrs Lyons only said that tall story to Mrs. Johnstone as threat and a precaution, it did actually happen. So, was their gruesome deaths due to superstition or class? When Mickey shot Edward, was it on purpose or did it actually go off on it's own accord? Did Mickey know the gun was loaded from the previous robbery for which he got sent to prison? Maybe Mickey purposefully shot Edward because he knows that if Mrs. Lyons chose him instead of Edward, he would have the easy life and Edward would be at the bottom of the barrel like Mickey. But on the other hand, would Mickey shoot his brother and long-time friend? ...read more.

bogey man gets y'" When Edward gets home, he asks his parents how 'bogey man' is spelt but Mrs Lyons says it is nothing to worry about: "It's a - a superstition. The sort of thing a silly mother might say to her children" This shows that Mrs Lyons is not superstitious and she does not want Edward to become superstitious. Without knowing it, Mrs Lyons is saying that Edward's real mother is a silly mother. When the children are playing cops and robbers and Indians, the rules are you have to cross your fingers and count to ten, otherwise you can't get up. This was new to Edward because he couldn't mix with the 'riff-raff' and play games with other children. When Mickey got shot when they were playing, he didn't cross his fingers but he got up anyway. Linda got upset with this and brought it up with Mickey. He replied by saying the 'F' word. He didn't cross his fingers when he swore so he will go to hell. All of his friends know this apart from Edward because they are all superstitious because they all have a similar background to Mickey. ...read more.

I thought I was gonna shoot y', but I can't even do that. I don't even know if the thing's loaded" Mrs Johnstone then runs up to the pair of them, along with lots of policemen and marksmen. She breaks the news that they are brothers and Mickey if furious with the news: "You!. Why didn't you give me away! I could have been .... I could have been him!" At that moment, Mickey waves the gun at Edward and the gun goes off, blowing Edward to pieces. The gun was loaded after all. Seeing this, the police marksmen in turn shoot Mickey to death. Mrs Lyons was right, they both died almost immediately they found out they were brothers. Was the death of the twins due to class or superstition? I think it was due to class. If they were brought up in the same family, none of this would have happened but as they were brought up in different classes, they both envied each other. Mickey was streetwise and a bit of a 'lad' but struggled to get through life, whereas Edward had had an easy life but he had to learn the ways of life through books and TV, not from his under-qualified parents. ?? ?? ?? ?? ...read more.