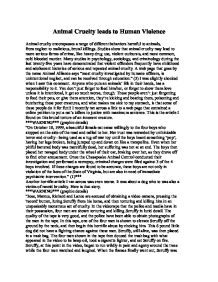 Animal Cruelty leads to Human Violence Animal cruelty encompasses a range of different behaviors harmful to animals, from neglect to malicious, brutal killings. Studies show that animal cruelty may lead to more serious forms of crime, like heavy drug use, violent outbursts, and most common, cold blooded murder. Many studies in psychology, sociology, and criminology during the last twenty-five years have demonstrated that violent offenders frequently have childhood and adolescent histories of serious and repeated animal cruelty. A web page that goes by the name Animal Alliance says "most cruelty investigated by humane officers, is unintentional neglect, and can be resolved through education." (3) I was slightly shocked when I saw this comment. Anyone who puts an animals' life in their hands, has a responsibility to it. You don't just forget to feed him/her, or forget to show them love unless it is intentional, it get so much worse, though. These people aren't just forgetting to feed their pets, or give them attention, they're kicking and beating them, poisoning and butchering these poor creatures, and what makes me sick to my stomach, is that some of these people do it for fun!! ...read more.

After slamming the shovel into Scruffy's neck and not being able to attain their goal, they realized that Scruffy was more of a fighter than they had expected. The men then opened Scruffy's mouth and began to pull his jaws apart, as if trying to rip his face in two. Using the shovel in place of a club, the men then beat Scruffy until his tiny body gave out, and he died. Throughout the videotape the four men are all shown laughing and having a good time as they are carrying out these unspeakable tortures." (1) *** After I read these stories I was disgusted, revolted, down right sickened by the realization that these men needed to be institutionalized or locked down. It's scare's me to think of what they would and are capable of doing to a human being. The FBI uses reports of animal cruelty in analyzing the threat potential of suspected and known violent criminals. Dr. Randall Lockwood, vice president of Training Initiatives for The Humane Society of the United States, states that "Researchers, as well as the FBI and other law enforcement agencies nationwide, have linked animal cruelty to domestic violence, child abuse, serial killings, and to the recent rash of killings by school-age children."(2) ...read more.

(2) In the in the past 18 months, we have seen seven school shootings. In each one, it was learned that the perpetrators had abuse, tortured, and killed animals before moving on to their human victims and our nation is wondering what happened. One of the most dangerous things that can happen to a child is to kill or torture an animal and get away with it. Our child must be taught young that it wrong to poke at puppy's eyes. We can't afford to ignore what we think of as childish exploration. Our children learn the most important aspects of life young and if they're not aware of what is right and wrong, it could possibly lead to more dangerous attempts. As a society, we can not tolerate cruelty towards animals. People inclined to inflict pain and torture upon animals have a predisposition to violence against both animals and humans. "A 1997 study by the Massachusetts Society for the Prevention of Cruelty to Animals (MSPCA) reports that youngsters convicted of animal abuse are five times more likely to commit violence against other humans than are their peers, four times more likely to be involved in acts against property, and three times more likely to be drug offenders. ...read more.