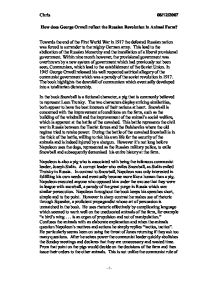 How does George Orwell reflect the Russian Revolution in Animal Farm? Towards the end of the First World War in 1917 the defeated Russian nation was forced to surrender to the mighty German army. This lead to the abdication of the Russian Monarchy and the installation of a liberal provisional government. Within nine month however, the provisional government was overthrown by a new system of government which had previously not been seen, Communism, which lead to the establishment of the Soviet Union. In 1945 George Orwell released his well respected satirical allegory of the communist government which was a parody of the soviet revolution in 1917. The book highlights the downfall of communism which eventually developed into a totalitarian dictatorship. In the book Snowball is a fictional character, a pig that is commonly believed to represent Leon Trotsky. The two characters display striking similarities, both appear to have the best interests of their nations at heart. Snowball is concerned with the improvement of conditions on the farm, such as the building of the windmill and the improvement of the animal's social welfare, which is apparent at the battle of the cowshed. ...read more.

This is not unlike the communist rule of Stalin and the communists themselves where they similarly ruled over the economic decisions of Russia. Old Benjamin is a donkey on animal farm that is the most sceptical of all the animals. His expression "nothing ever changes" shows his scepticism at the new government and revolution which has taken place. He seems like a much wiser and mature character and is seemingly the only animal on the farm who is immune to the propaganda of Napoleon. Some of the quotes themselves can indeed be seem as being counter rhetoric in that "donkeys live for a long time" which would seemingly suggest that he has seen it all before and nothing will change. He often takes a back seat in many things and is able to read as well as any pig, something that that he keeps to himself until the very end of the book. Eventually though after Napoleon sends boxer off to the glue factory, there is a subtle change in Benjamin's demeanour. He is no longer just willing to sit back and watch the changes happening as he finally stands up to Napoleon for the first time and reveals his knowledge of the pig's hypocrisy. ...read more.

Farm did more work and received less food than any animals in the county" I believe that the book is one of the greatest illustrations of human greed. It is often said that the path to righteousness is narrow and in the case of Napoleon and Stalin it was unobtainable. The book contains so many valuable lessons which society would do well to learn by heart. Stalin was allowed to reign because no one opposed him. The masses were generally too dumb and uneducated to even realise they were no longer living under communism, but a totalitarian dictatorship. This is something which could easily happen even today. For example, we believe we have a good democracy, but the reality is the government of the UK, in my opinion, is closer to a dictatorship than many would like to believe. Tony Blair controls all major decisions and doesn't even bother with cabinet meetings, a place where all the decisions of the government are taken, rather it is now the case that Tony Blair makes the decisions before hand and then informs the rest of the cabinet. This bears a striking and scary similarity to Napoleon in how he delivered his orders to the animals. ?? ?? ?? ?? Chris 06/12/2007 -1- ...read more.

This answer is a response to a question asking candidates to consider the reality of the Russian Revolution present in George Orwell's 'Animal Farm'. This answer discusses in profound detail about the similarities of the book and the 1917 Tsarist ...

This answer is a response to a question asking candidates to consider the reality of the Russian Revolution present in George Orwell's 'Animal Farm'. This answer discusses in profound detail about the similarities of the book and the 1917 Tsarist collapse, with an excellently-sourced knowledge of the social and historical factors that influenced Orwell's writing. The attention to detail is outstanding, and there is clear evidence of a very well-informed understanding of the entire novel. The candidate even structure their concluding paragraph with a real life anecdote of our own UK government, and this holistic focus on the question presents an unrivalled comprehension of every aspect of the novel and it's similarities to the Russian monarchy of 1917 and even today's government.

The Level of Analysis shown by this candidate is exceptional. There is every indication that the candidate is working towards a high A* grade for GCSE, possibly even achieving top marks. I particularly enjoy the deep-set level of understanding the candidate has dedicated to contextualising the Russian Revolution by showing a good understanding of the politics that brought about the Revolution, and their essay structure works well as they disucss each character and their political figure equivalent in turn. Some examiners may note that there should be an established link made between Karl Marx and Old Major, and perhaps a more explicit link made between Vladimir Lenin and Squealer, as these two characters are very important to the estabishment of Communism/Animalism and also as Stalin/Napoleon's henchman respectively.
Nonetheless, this essay is very focused, well-written and well-expressed, and draws from many sources in the book to evidence their answer. What I would've liked to have seen more of though, is a greater number of quotes from the source material. With references a-plenty, it would not be out of the candidate abilities to do so, and it is a requirement of the exam that the understanding of the text is shown via quotes to evidence points. Whilst the given answer is a very strong response, it can only be made stronger with the use of well-sourced quotes. But in the same breath, the external quotes from historical research evident such as Lord Acton's letter to Bishop Mandell Creighton ("Power tends to corrupt, and absolute power corrupts absolutely") are very good at showing external, independent research has been conducted, showing a candidate with a real enthusiasm for the novel and the analysis of it.

The Quality of Written Communication (QWC) is fair. There are moments where words/names that should be capitalised are left in lower case (snowball, great purge) and there are a few moment where comma splice is used ("a new system of government which had previously not been seen, Communism, which lead to the establishment of the Soviet Union") this last example should see a colon used before "Communism" and then a full stop, with the subordinate clause making up a new sentence. Other than that, the QWC is highly accurate, and the spelling is flawless despite the challenging vocabulary.