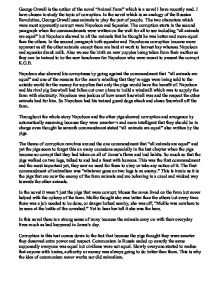 George Orwell is the author of the novel "Animal Farm" which is a novel I have recently read. I have chosen to study the topic of corruption. In the novel which is an analogy of the Russian Revolution, George Orwell uses animals to play the part of people. The two characters which were most apparently corrupt were Napoleon and Squealer. The corruption starts in the second paragraph when the commandments were written on the wall for all to see including "all animals are equal" but Napoleon showed to all the animals that he thought he was better and more equal than the others. In the second paragraph both squealer and Napoleons corruption became more apparent as all the other animals except them are hard at work to harvest hay whereas Napoleon and squealer drank milk. Also we see the birth on new puppies being taken from their mother so they can be trained to be the new henchmen for Napoleon who were meant to present the corrupt K.G.B. ...read more.

The theme of corruption revolves around the one commandment that "all animals are equal" and yet the pigs seem to forget this on many occasions especially in the last chapter when the pigs become so corrupt that they had taken on all of Jones's flaws and bad habits. So much so that the pigs walked on two legs, talked to and had a feast with humans. This was the first commandment and the most important yet, they saw no need for them to obey or take any notice of it. The first commandment of animalism was "whatever goes on two legs is an enemy." This is ironic as it is the pigs that are now the enemy of the farm animals and are behaving in a cruel and wicked way towards the other animals. In the novel it wasn't just the pigs that were corrupt; Moses the raven lived on the farm but never helped with the upkeep of the farm. ...read more.

Napoleon was so corrupt he started to change his own rules or add bits on to suit his changing lifestyle such as the addition off "in excess" to "no animal shall drink alcohol" and to "no animal shall sleep in a bed with sheets." The whole idea of corruption stemmed from greed in Napoleon's case. He thought he was better than any of the other animals on the farm so he thought he had to have the most, or best amount of the good things in life such as food, water, warmth and respect. The dogs in the novel were the most corrupt because of the executions the dogs carried out on the other "guilty" animals as they were seen with the pigs that were especially in alliance with Snowball "the dogs promptly tore their throats out." Therefore we can conclude that power is very dangerous and will almost always lead to corruption which will inevitably lead to a rebellion and the cycle of corruption will continue. ...read more.