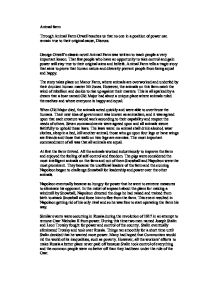 Animal farm Through Animal Farm Orwell teaches us that no one in a position of power can remain true to their original cause, Discuss. George Orwell's classic novel Animal Farm was written to teach people a very important lesson. That few people who have an opportunity to take control and gain power will stay true to their original aims and beliefs. Animal Farm tells a tragic story that aims to prove that human nature and diversity prevent people from being equal and happy. The story takes place on Manor Farm, where animals are overworked and underfed by their drunken human master Mr Jones. However, the animals on this farm catch the wind of rebellion and decide to rise up against their masters. This is all sparked by a dream that a boar named Old Major had about a unique place where animals ruled themselves and where everyone is happy and equal. ...read more.

They became the unofficial leaders of the farm and the cunning Napoleon began to challenge Snowball for leadership and power over the other animals. Napoleon eventually became so hungry for power that he went to extreme measures to eliminate his opponent. In the midst of a speech about the plans for making a windmill by Snowball, Napoleon directed the dogs he had raised and trained from birth to attack Snowball and force him to flee from the farm. This event resulted in Napoleon getting rid of his only rival and so he was free to start operating the farm his way. Similar events were occurring in Russia during the revolution of 1917 in an attempt to remove Czar Nicholas II from power. During this time two men named Joseph Stalin and Leon Trotsky fought for power and control of the country. ...read more.

The Response to the question is very focused; focused on the specific steer of the question and the candidate displays an adeptness of understanding and contextual appreciation within George Orwell's novel. The candidate succeeds in their answer because of it's ...

The Response to the question is very focused; focused on the specific steer of the question and the candidate displays an adeptness of understanding and contextual appreciation within George Orwell's novel. The candidate succeeds in their answer because of it's strength and persistent focus - referring back the the question regularly and including a whole paragraph of contextual analysis, showing evidence of external research. This external research is exactly the kind of work ethic that examiners want to see in all candidate hoping to achieve top marks, because it shows that they are capable to use the incentive to conduct independent research, meaning they can write their answers with enthusiasm, flair and most of all, insightful comprehension.

Where this essay falls down is that the candidate has neglected to quote from text. There are moments where paraphrasal techniques are used, but only one genuine word-for-word quote is used. Essays of the analytical, evaluative kind must be constantly referring to the source text they're analysing. It shows that there is a knowledge of how to use the text to back up the points a candidate has made, before integrating further explanation as standard in the PEE (Point, Evidence & Explanation) formula. Though is is perfectly within candidates' rights to digress from this prescribed formula in analytical essay writing, it is still an imperative that they quote from the source text. All the points the candidate makes are extremely effective - commenting on how the pigs manipulated their own so they could be positioned in a seat of authority and the manipulated further the rules of their reign so to benefit them more; this analysis was effective as it is an example of how the candidate indirectly (though not ambiguously) refers to the question, showing they have an adeptness with writing and an ability to rephrase the statement question (though using the exact phrasing the question has used can make the link to the question more explicit - it's nothing you can be penalised for).
The recognition of the Russian Revolution is something that candidates can simply be told about by their teachers, but this candidate demonstrates a fresh understanding that stands out from lesser ability candidates by mentioning the names (Joseph Stalin, Leon Trotsky) and how the Revolution came to be, whilst also mentioning which characters are presented as these real life figures within Orwell's novel.
One minor inconsistency in this answer is when the candidate correctly identifies "All animals are equal" as the most important rule of Animalism, but then goes on to say: "until the pigs made the ultimate betrayal by walking upon two legs". This is also right, but there should be explanation as to why walking on two legs was considered by all animals on the farm as "the ultimate betrayal". The candidate should've noted that this was the only rules most other animals could understand, as the limit of their intelligence was that they could count, and it was only this rule that they had first objected (because of the birds being an unusual classification).

The Quality of Written Communication is very good. There is a range of sentence structures showing a confident writer and there are very few spelling errors, none of which compromise the reasoning of the answer.