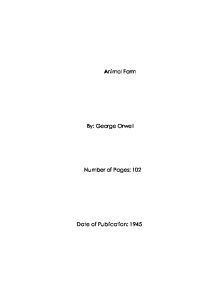 Animal Farm By: George Orwell Number of Pages: 102 Date of Publication: 1945 Animal Farm is a novel of dreams, hatred, betrayal and rebellion. One night, all the animals of Mr. Jones' Manor Farm, assemble in the old barn house to hear the speech of an old respected animal on the farm, old Major, a pig that has a dream that the rest of the farm animals will be free from a life of slavery and torture of their human masters. Soon after old Major dies the other animals are inspired by this thought of "Animalism". Animalism is about having a life of freedom that all animals are equal and they will run the farm by themselves. The animals plot their rebellion against their human master and when their master forgets to feed them this is when the rest of the animals take action to drive Mr. Jones out of his farm. During this event it is evident that two of the pigs, Napoleon and Snowball are the cleverest animals on the farm, as they make the plans of the rebellion, and they change the name of the farm from the Manor Farm to Animal Farm. The animals decide to have meetings in the farm house to discuss what they are going to do the following day, and the pigs become the new leaders because of their intelligence. But the power-hungry Napoleon steals the cow's milk and apples for himself and the other pigs, and Napoleons excuse for his actions are that the pigs need extra food and milk for thinking. Napoleon also gets the help of Squealer, a pig that is good at persuading the others. Later Mr. Jones and his men come back to retake the farm, but thanks to Snowballs tactics the animals chase them off again. This battle is then known as the Battle of the Cowshed. Snowball draws up plans for a windmill, which will give the animal's electricity and more leisure time, but Napoleon is against this idea, and the next meeting he summons a pack of vicious dogs that chase Snowball off the farm forever. ...read more.

It was also Snowballs plan to lure Mr. Jones and the rest of the men inside the "yard" so that all the animals could attack, but Snowball showing great bravery charged towards Mr. Jones, who had a gun, raised his gun and fired "the pellets scored b****y streaks along Snowballs back", and yet Snowball still continued to charge towards him and he threw his fifteen stone of weight towards Jones's legs. After all of this Snowball is awarded "animal hero, first class". Later on in the novel Napoleon says that this is just a scheme as Snowballs, to make the other animals believe that he is not working for Mr. Jones and the other animals believe this. Snowball was reading a book on innovations and improvements and thought that that after reading this it would be a good idea to build a windmill But Napoleon says quietly "that Snowball's would come to nothing". He says this referring to Snowball's schemes on the plans of the windmill. Snowball wanted this windmill to be built so that it would benefit the other animals, provide electricity to the farm so that the pigs could use some of the machines on the farm, the electricity would light the stalls and warm them in the winter. The windmill would also bring more leisure time to the animals. Napoleon "declared himself against the windmill from the very start". Even Snowball declared that it would not be easy to build the windmill, but later in the novel Napoleon forces the others to make it. The animals realise that Mr. Jones might come back to the farm and make a more determined effort to capture it, Napoleons answer to this is violence, to teach the others how to use firearms, however Snowballs approach to this was more diplomatic, to send pigeons to the surrounding farms to stir up rebellion, so that he hoped the other farms would side with Animal Farm. ...read more.

It was the pigs that came up with these rules and all the other animals just nodded in agreement when they were discussing them. After this when it was obvious that the pigs became the new leaders they started to disobey these rules and they changed them in the middle of the night fitting them around what they did for example; no animal shall drink alcohol, they changed to no animal shall drink alcohol to excess. The pigs decided to do this with all of the commandments as they disobeyed them because they didn't want the other stupider animals to revolt and they could convince them that this was not the case anyway. As the pigs disobey these rules they gradually begin to act more and more human, what in the first lace these rules were created to stop them from becoming, the thing they hated the most dominant and authoritarian, and becoming like humans. My response to this novel is that, I enjoyed it because it shows hoe life works, as in the novel when the pigs turn against the commandments and start to take advantage of the less wittier animals and they kill them, humans also do this by means of war. It also shows how gullible some of the animals can be, that they would believe anything said to them by the more intelligent. I also liked this novel because it depicts how cruel humans can be towards animals, as shown by the pigs as they soon became what they hated the most, and they became controlling and they thought that they were better than everyone else. I would recommend this novel as it is a timeless classic that depicts sheer power- hungry, controlling and paranoid behaviour. The novel also shows how a person or an animal would do anything to be a powerful leader, from killing others in front of their own kind to getting someone that is good at convincing others in the way that they want. ?? ?? ?? ?? ...read more.