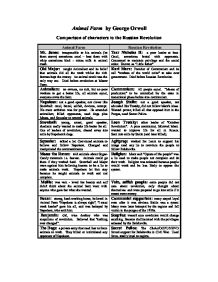 Animal Farm by George Orwell - Comparison of characters to the Russian Revolution.

Animal Farm by George Orwell Comparison of characters to the Russian Revolution Animal Farm Russian Revolution Mr. Jones: irresponsible to his animals (let them starve) sometimes cruel - beat them with whip sometimes kind - mixes milk in animal mash. Tsar Nicholas II: a poor leader at best. Cruel, sometimes brutal with opponents. Concerned to maintain privilege and the social order. Known as "Little father" Old Major: taught Animalism and its belief that animals did all the work whilst the rich farmers kept the money. An animal revolt was the only way out. Died before revolution at Manor Farm. Karl Marx: Founder of Communism and its call "workers of the world unite" to take over government. ...read more.

Wanted power, killed all that opposed him in the Purges, used Secret Police. Snowball: young, smart, good speaker, idealistic really wanted to make life better for all. One of leaders of revolution, chased away into exile by Napoleon's dogs. Leon Trotsky: other leader of "October Revolution". A pure communist, followed Marx. wanted to improve life for all in Russia. Sent into exile by Stalin (and later killed). Squealer: talked a lot. Convinced animals to believe and follow Napoleon. Changed and manipulated the commandments Agitprop: worked for Lenin to support his image used any lie to convince the people to follow Bolsheviks Moses the Raven: told animals about Sugar-Candy mountain i.e. heaven. Animals could go there if they worked hard. ...read more.

Vain, selfish people: some people did not care about revolution, only thought about themselves and were prepared to go into exile if it meant more money. Boxer: strong, hard-working horse, believed in Animal Farm "Napoleon is always right", "I must work harder" gave his all, and was betrayed by Napoleon, who sold him. Communist supporters: many stayed loyal even after it was obvious Stalin was a tyrant. Many were later betrayed by the regime and fell victim in the purges of the 1930s. Benjamin: old, wise donkey who was suspicious of revolution. Believed that "nothing ever changed". Sceptics: weren't sure revolution would change anything. Became disillusioned with the privileges amassed by the Bolsheviks. The Dogs: a private army that used fear to force animals to work. They killed or intimidated any opponent of Napoleon. Secret Police: The Cheka/OGPU/NKVD forced support for Bolsheviks in Civil War. Used force, totally loyal to regime. ...read more.