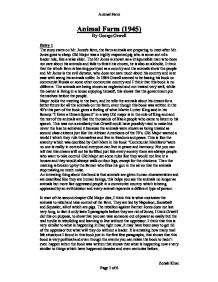 Animal Farm (1945) By George Orwell Entry 1 The story starts on Mr. Jones's farm, the farm animals are preparing to meet after Mr. Jones goes to sleep. Old Major was a highly respected pig who is some sort of a leader role, like a wise elder. The Mr Jones is shown as a irrisponsible man who boes not care about his animals and fails to finish his chores, he is also an alcholic. I think that the whole farm is beening portryed as a country and the animals show the people and Mr Jones is the evil dictator, who does not care much about his country and is at ease with seeng his animals suffer. In 1984 Orwell seemed to be basing his book on communist Russia or some other communist country and I think that this book is no different. The animals are being shown as neglected and not treated very well, while the owner is living in a house enjoying himself, this shows that the government put themselves before the people. Major holds the meeting in the barn, and he tells the animals about his dream for a better future for all the animals on the farm, even though this book was written in the 40's this part of the book gives a feeling of what Martin Luther King said in his famous "I Have a Dream Speech" in a way Old major is in the role of King and and the rest of the animals are like the thousands of Black people who came to listen to his speech. This was not a similarity that Orwell could have possibly tried to make but never the less he achieved it because the animals were shown as being treated as second class citizens just like the African Americans of the 70's. Old Major wanted a world I which they rule themselves and live in freedom and peace. ...read more.

It is quite ironic that Nepoleon is using the dogs to hold power because a dog is ment to be a mans best friend not a pigs. He is now using the dogs to keep his grip on power and the dogs are acting just like thaey would if they were with Jones. Once again Squealer is used to calm the people down and spread propergander. A few weeks later, Napoleon uses Snowballs idea to build a windmill. The animals now have to help build the windmill, as well as keeping the farm running. The animals are now working very hard and do not even get their weekend any more. Boxer is the one who is working the hardest and it is clear that the animals look upto him because of this. Once again iriony is in this book because the very thing which is suppose to lessen their work load is actually increasing it, but the animals believe that this will only be short lived and the once it is built then things will change. Even though the animals are working harder than they had to with Jones, they think that aslong as they have enough food to eat they are happy. What the animals don't see is that they are the ones who are getting the food and the only animals who are gaining out of this is the pigs. Napoleon is now trading with the other farmers and also Napoleon had hired a solicitor to act on their behalf. Animal farm was suppose to be for the animals and about the animals, but now that Nepoleon is doing business with humans it seems like all the original ideas and thoughts about animal farm are now dead, and it seems that Nepoleon is trying to become more human like. The pigs also began to live in the farmhouse, and once again Squealer justified this action by saying that the pigs required peace and quiet in order to carry out their brain work. ...read more.

One daythe animals see Squealer walking on his back legs carrying a whip, followed by a long line of pigs doing the same, and in the barn, the Commandments have been erased and replaced by a single slogan, "All animals are equal, but some animals are more equal than others." From that day on, the pigs supervise the other animals carrying whips. The sheep now say a different slogan, "Four legs good, two legs better." One night some of the animals go to the window of the house, and they see Napoleon and some other pigs, they are having a partywith the humans. They are toasting the prosperity of Manor Farm, the name "Animal Farm" has been changedabolished. As the animals look through the window, they "looked from pig to man, and from man to pig, and from pig to man again: but already it was impossible to say which was which." This is the final step, throughout the book you can see Nepoleon and the other pigs slowly changing into humans but now they have finished the transformation and you can no longer tell the diference between pigs and humans. I believe that the animals are now worse off then they were with Jones because at least then even though they were not given as much food as before they now do huge amounts of work and have to answer to Nepoleon. I think that this is a great ending and shows how a country would turn out if a dictator could forefill what he wanted to do, because in the past their have not been what you could call successful dictators and nobody has really achied all that they set out to do. But Nepoleon managed to do this and did not deliever on any of his promises. But as you read the final page, the question beckons. Will nepoleon eventualy be defeated just like the man he was name after od will there be no defeat at Waterloo for this Nepoleon. Animal Farm Zohab Khan Page 1 of 6 ...read more.