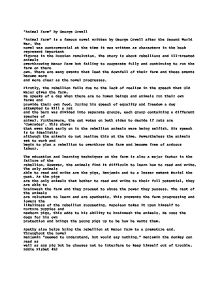 "Animal Farm" By George Orwell "Animal Farm" is a famous novel written by George Orwell after the Second World War. The novel was controversial at the time it was written as characters in the book represent important figures in the Russian revolution. The story is about rebellious and ill-treated animals overthrowing Manor Farm but failing to cooperate fully and continuing to run the farm on there own. There are many events that lead the downfall of their farm and these events become more and more clear as the novel progresses. Firstly, the rebellion fails due to the lack of realism in the speech that Old Major gives the farm. He speaks of a day when there are no human beings and animals run their own farms and provide their own food. ...read more.

The education and learning techniques on the farm is also a major factor in the failure of the rebellion. However, the animals find it difficult to learn how to read and write. The only animals able to read and write are the pigs, Benjamin and to a lesser extent Muriel the goat. As the pigs are the only animals that bother to read and write to their full potential, they are able to brainwash the farm and they proceed to abuse the power they possess. The rest of the animals are reluctant to learn and are apathetic. This prevents the farm progressing and lowers the likeliness of the rebellion succeeding. Napoleon takes it upon himself to nurture puppies and newborn pigs, this adds to his ability to brainwash the animals. ...read more.

This makes them vulnerable to the propaganda of the pigs, this is the speciality of Squealer. He uses statistics and language that the animals cannot comprehend to cover up the egotistical ways of the pigs. He often makes "a round of the farm to set the animals' minds at rest." As they do not have the intelligence to prove Squealer and the pigs wrong the animals accept that what the pigs say is true. Conclusively, it can be said that the downfall of Animal Farm is due to the greed and lack of equality shown by the pigs. The apathetic manner of the animals also contributes the failure of the rebellion. Napoleon, from the very beginning, planned to take control of the farm and run it as he wished. In the end the rebellion failed and the only one to be blamed can be Napoleon and his dictatorship. ...read more.