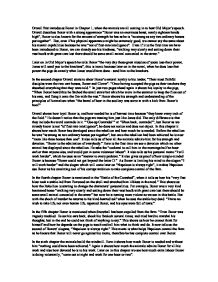 Orwell first introduces Boxer in Chapter 1, when the animals are all coming in to hear Old Major's speech. Orwell describes Boxer with a strong appearance "Boxer was an enormous beast, nearly eighteen hands high", Boxer is also known for the amount of strength he has as he is "as strong as any two ordinary horses put together". But, even if his physical appearance might be extremely good, we cannot say the same about his mental capabilities because he was "not of first-rate intelligence". Even if it is the first time we have been introduced to Boxer, we can already see his kindness, "walking very slowly and setting down their vast hoofs with great care lest there should be some small animal concealed in the straw." Later on in Old Major's speech he tells Boxer "the very day those great muscles of yours lose their power, Jones will send you to the knackers", this is ironic because later on in the novel, when he does lose that power the pigs do exactly what Jones would have done - send him to the knackers. In the second chapter Orwell starts to show Boxer's natural loyalty to his leader, "Their most faithful disciples were the two cart-horses, Boxer and Clover". "Once having accepted the pigs as their teachers they absorbed everything that they were told." ...read more.

It now tells us the second of Boxers' slogans, "Napoleon is always right." This motto is what helps Napoleon control the farm as he knows that Boxer will never go against his motto, therefore he has complete control over Boxer. In the sixth chapter the animals build the windmill. Here it shows how much Boxer is needed and without him "nothing could have been achieved." Again it shows how much the animals admire Boxer for all his work and also how devoted he is to his work. Later on in this chapter we see how much extra labour Boxer is doing voluntarily, "come out at night and work for one hour or two". In the seventh chapter it shows how much faith Boxer has in Napoleon because he "never lost heart". Again here it shows how the animals find "inspiration in Boxer", and how the pigs can use him for propaganda. For the first time, Boxer argues with Squealer for the honour of Snowball, "Snowball fought bravely at the Battle of the Cowshed." They kept on arguing, but as Squealer knows Boxer so well he mentions that Napoleon said it and that was how the conversation ended. Then it shows how his character has changed again, from being kind and gentle to be a killing animal. "Boxer saw them coming and put his great hoof, caught a dog in mid-air and pinned him to the ground", if he was the same as ...read more.

"But Benjamin pushed Muriel aside and in the midst of a deadly silence he read: "Alfred Simmonds, Horse slaughter," then he explained what the writing on the van meant by saying simply, "They are taking Boxer to the knackers!" When the animals appeal to the two cart horses to not "take your own brother to his death", they simply sped up because the "stupid brutes" were "too ignorant to realise what was happening". This is ironic because Boxer used to be exactly the same, all he cared bout was completing his job properly. The last mention of Boxer in 'Animal Farm' is by Napoleon when he "pronounced a short oration in Boxer's honour." We see that even in his death Boxer is used for propaganda when Napoleon says, "I will work harder and Comrade Napoleon is always right, he said, which every animal would do well to adopt it as his own." In general we see Boxer as a very kind and loving animal. We see the extent of his kindness by seeing how close he gets to even the most cynical animal in the entire farm, Benjamin. Another reason why Orwell introduces Boxer into the novel is to show the extent of corruption that Animal Farm had gone to. We see this from Boxer especially, because even after all the hard labour, even extra voluntary labour, devotion and faith in the pigs and in Napoleon, he is still sent to the knackers without a second thought. ...read more.