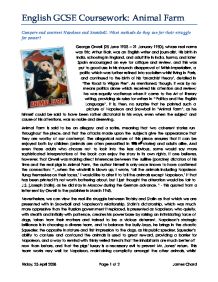 Animal Farm: Compare and contrast Napoleon and Snowball. What methods do they use for their struggle for power?

English GCSE Coursework: Animal Farm Compare and contrast Napoleon and Snowball. What methods do they use for their struggle for power? George Orwell (25 June 1903 - 21 January 1950), whose real name was Eric Arthur Blair, was an English writer and journalist. His birth in India, schooling in England, and adult life in India, Burma, and later Spain encouraged an eye for critique and review, and this was put to good use in his staunch disapproval of British Imperialism, a politic which was further refined into socialism whilst living in Paris, and continued to the birth of his 'anarchist theory', detailed in "The Road to Wigan Pier". As mentioned, though, it was by no means politics alone which received his attention and review; he was equally vociferous when it came to the Art of literary writing, providing six rules for writers in "Politics and the English Language". ...read more.

Nevertheless, we can view the real-life struggle between Trotsky and Stalin as that which we are presented with in Snowball and Napoleon's relationship. Stalin's dictatorship, which was much more oppressive than the Russian government it replaced, is presented as Napoleon, who quietly, with stealth and initially with patience, creates his power base by raising an intimidating force of dogs, taken from their mothers and trained to be a vicious deterrent. Napoleon's strategic brilliance is in choosing a diverse team, and to balance the bully-boys, he brings in the chaotic Squealer, the opposite in stature and first impression to the dogs, as his public speaker. Squealer's ability to confuse and confound the animals is used to great reward, providing a barrier for Napoleon, and a way to remind with thinly veiled threats that the inhabitants are much better off now than before, and that the pigs' luxury is a necessary evil to prevent Mr. ...read more.

Holding mock trials and executing those 'in collusion with the enemy' increases fear and compliance, whilst ridding Napoleon of those who may have become a threat to his leadership. The farm's population is grateful that it has been spared from terrible Snowball, yet all the while the fear and uncertainty that they have grows. Of course, such a dictatorship would never have been allowed when the rules were written, and so these rules must themselves be modified, and the memory of them corrected. Ensuring a lack of education, except for pigs, is the means by which this is achieved. The slow modification of the ideals on which the farm was founded is ultimately its downfall, as its metamorphosis into that which it was intended to replace is gradually made complete. Acton's absolute corruption is an inevitable product of a self-serving regime, and Orwell suggests that under either leader, this would be our eventual outcome. ?? ?? ?? ?? Friday, 25 April 2008 Page 1 of 2 James Chard ...read more.

This answer shows all the signs of an extremely competent writer, you very frequently adopts external, independent research and incorporates it into their essay, fortifying it's knowledgability. However, in doing so the question is somewhat avoided and the analysis of ...

This answer shows all the signs of an extremely competent writer, you very frequently adopts external, independent research and incorporates it into their essay, fortifying it's knowledgability. However, in doing so the question is somewhat avoided and the analysis of the similarities and differences between Snowball and Napoleon are not as clear as they could be, with such an excellent writer at the helm. It appears that they are not so proficient at focused analysis as this question does deviate even after it's started (the prolonged introduction about the biography of Orwell is not required and elicits no marks at all - it is a grave misconception of students that rushed biographies make good introductions).

The Level of Analysis is broad, with two differences and one very unclear similarity (so, an unbalanced essay - candidate should be looking for at least two differences and two similarities for "Compare and contrast" questions), the latter appearing accidental at best. The candidate spends too long commenting on the unimportant parts of the highly important analytical topics. For instance, Napoleon and Snowball are both recognised as a presentation of a real life political figure, yet the candidate writes as if they believe the examiner knows this. Granted, the examiner most certainly will know this, but it is imperative that explicit statements are made, as if the candidate was writing to inform someone who has never read the novel about it's contents e.g. - "Both Snowball and Napoleon are representational allegories of real life political figures Leon Trotsky and Joseph Stalin". A lot of the time, independent research such as the letter excerpt from Orwell to his publisher is good, but it must not take the place of effective analysis as the information will always be surplus - the basic fundamentals of the essay still need to be present and the question must be satisfied.

The Quality of Written Communication is outstanding. The candidate makes very clear statements with a bold use of specialist terminology and an excellent range of vocabulary. All spelling is accurate and grammar is also perfect.