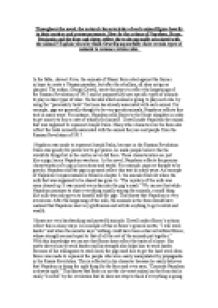 ﻿Throughout the novel, the natural characteristics of each animal figure heavily in their motives and pronouncements. How do the actions of Napoleon, Boxer, Benjamin and the dogs and sheep reflect the traits normally associated with the animal? Explain you why think Orwell purposefully chose certain types of animals to assume certain roles. In the fable, Animal Farm, the animals of Manor Farm rebel against the farmer in hope to create a Utopian paradise, but after the rebellion, all does not go as planned. The author, George Orwell, wrote this story to reflect the happenings of the Russian Revolution of 1917 and he purposefully uses specific types of animals to play certain types of roles. He decides which animal is going to play each role by using the ?personality traits? that man has already associated with each animal. For example, pigs are generally thought to be very greedy animals, Napoleon reflects this trait in many ways. For instance, Napoleon sells Boxer to the Horse slaughter in order to get money to buy a crate of whisky for himself. ...read more.

His motto drives him to work harder and his strength also helps him to work harder. Because of his willingness to work hard, the pigs used him to get the hard work done. Boxer was made to represent the people who were easily manipulated by propaganda in the Russia Revolution. This is reflected in his character because he easily believes that Napoleon is doing the right thing for the farm and even says, ?Comrade Napoleon is always right.? This shows that Boxer is not the cleverest animal on the farm and is easily ?excited? by the revolution that he does not stop to think if everything is going well. Because of his quickness to believe everything that Napoleon says, Boxer is sold to the horse slaughterer for money when he is unable to work. Napoleon tells Boxer that he is sending him to the hospital, and Boxer goes without thought always saying, ?Comrade Napoleon is always right.? This leads to his death. Horses in general are also like this, they do things in haste and trust to easily. ...read more.

? ?with his huge nine dogs frisking around him and uttering growls that sent shivers down all the animal?s spines. ???. Napoleon stood sternly surveying his audience; then he uttered a high-pitched whimper. Immediately the dogs bounded forward , seized four of the pigs by the ear and dragged them, squealing with pain and terror to Napoleons feet.? This shows that the dogs are very trustworthy to Napoleon and will do his bidding. This extract also shows that the dogs are fierce and will hurt the other animals if necessary. These traits reflect those of dogs because dogs do what they are told and will harm others if needed. Sheep are known to be followers. Orwell?s sheep reflect this trait. For example, in chapter 10 the sheep bleat, ?Four legs good two legs better. Four legs good two legs better. Four legs good two legs better.? With this information and previous extracts, we can see that Napoleon has told the sheep to say this slogan and the sheep followed him without question. Throughout the whole story the sheep have reflected the trait that was thought of them by following whatever they have been told without having even one thought about it. ...read more.