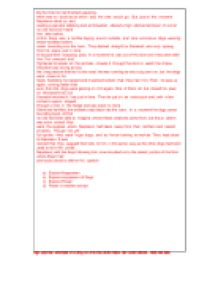 In the extract, Napoleon is portrayed almost like a commander of an army as he, 'uttered a high pitched whimper of a king no one had ever heard him utter before,' here we see Napoleons cry, similar to a war cry which indicates his power and brings military connotations to his character. Also, from this war cry, the dogs attack snowball which shows us how Napoleon is a ruthless character and cannot cope with defeated so expels snowball so he can gain power. From this extract, we can also see how Napoleon lacks good morals and is a corrupt character, 'they were puppies who Napoleon had taken away from their mothers and had reared them privately...' here we understand that Napoleon has taken the puppies from their natural upbringing and has brought them up himself which is unnatural and morally wrong. Furthermore, the adjective, 'privately' symbolises the isolation of the puppies that Napoleon has put them through. Orwell also indicates that Napoleon is a negative character and a bad influence, 'it was noticed that the dogs wagged their tails...like...used to do with Mr Jones' here we understand the similar characteristics Napoleon has to Mr Jones who was the enemy as they both have the same influence on the dogs. ...read more.

.' here it is evident that the dogs are superior over snowball as they use fear to expel snowball from the farm. Furthermore, fear is also used to gain power in the quote, 'the animals crept back' here through the verb, 'crept' we understand their fear and they follow napoleon back in to the barn without being prompted. In the extract, we can see that Napoleon has power over the animals, 'Napoleon with the dogs following him, now mounted on to the raised portion of the floor' which symbolises his higher place than the other animals. Also, we can see that Napoleon now has the same amount of power as old major, 'where major had stood' here we compare Napoleon to Old Major who was a very powerful pig and was respected by the animals. Furthermore, the quote, 'with the dogs following' demonstrates how he has power because of the dogs. Also, power is signified from the power that Napoleon has over the other animals, 'they kept close to Napoleon' it was noticed they wagged their tails with him... used to do with Mr Jones.' From, 'they kept close' we understand that Napoleon has a significant power over the dogs and they stay by his side at his will. ...read more.

here to word 'so' emphasises their intelligence. The power that the pigs have is also demonstrated by how they do not have to work as hard as the other animals, 'every animals down to the humblest' worked at turning the hay... even the ducks and hens toiled...' an comparison the pigs barely lifted a finger, 'a pig walking behind calling gee up comrade or whoa back comrade' here Orwell depicts the contrast between the roles of the pigs and the other animals. Furthermore, this is emphasised by, 'it was the biggest harvest that the farm had ever seen' which emphasises the hard work of the animals to make it such a success which very little was contributed from the pigs. The power of the pigs is also demonstrated towards the end of the extract, 'it was always the pigs that put forward the resolution,' here we can sense the superior roles of putting ideas forward for the farm that no other animal did because, 'they could never think of any resolutions of their own' which further indicates the pigs intelligence and power over the other animals. From these two quotes, we can see that only the pigs put forward resolutions which have a big impact to the farm and this shows us their power on the farm compared to the other animals. ...read more.