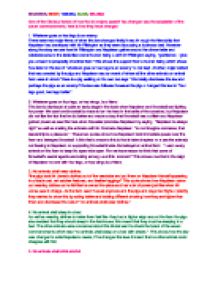 Animal Farm - how the seven commandments are adapted.

One of the Obvious factors of how the old majors speech has changed was the adaptation of the seven commandments, here is how they have changed: 1. Whatever goes on two legs is an enemy There were two major times of when this law changes firstly it was through the friendship that Napoleon has developed with Mr Pilkington as they were discussing a business deal. However along the story we see how Mr Pilkington and Napoleon gather around the dinner table and celebrate around the table like normal human beings with Mr Pilkington saying, "gentleman, I give you a toast: to prosperity of animal farm" this shows the support from a human being which shows how later on the law of 'whatever goes on two legs is an enemy' is not kept. Another, major default that was created by the pigs and Napoleon was an event of where all the other animals on animal farm were in shock "there is a pig walking on his own two legs" this totally dismisses the law and portrays the pigs as an enemy if the law was followed however the pigs changed this law to "four legs good, two legs better". 2. Whatever goes on four legs, or has wings, is a friend This law is dismissed at quite an early stage in the book when Napoleon and Snowball are fighting for power. ...read more.

Napoleon broke his own commandment here by drinking alcohol in the first place. 6. No animal shall kill any other Animal This law as we can see is disregarded in two places, the first is when the fifth rule is changed to 'the drinking of alcohol was to be punished by death'. This shows that napoleon would kill anyone if they drank alcohol even though he said he would not kill any animal. Later on in the book napoleon kills lots of animals starting with the four pigs that claimed to be in contact with snowball ever since he left animal farm. He then goes on and kills all the other animals that confess to any sort of crime they did. Once he finished killing all the animals he changed the law from 'No animal shall kill any other Animal' to 'No animal shall kill any other Animal without a cause'. This was another commandment napoleon made and then broke himself, as well as also dismissing the last commandment that all animals are equal. 7. All animals' are equal This is the last commandment broken by napoleon. Throughout the book napoleon disobeys his own rule and treats animals differently. The first step he does to break this is when he takes the dogs into the roof and privately teaches them as they were going to be the next generation - the important one napoleon thought. ...read more.

Do you know what would happen if we pigs failed in our duty?" In the book the word 'Your' is emphasized to show how Squealer uses one word to create guilt amongst the other animals and fool them in they way of that it is okay for the pigs to have higher authority than other. Orwell uses the rhetorical question to make the animals feel guilty which gradually allows the pigs to take power over time. On page 35, Squealer gives another speech. When he says, "Surely, comrades, you do not want Jones back?" Squealer uses the same argument that Old Major did that the animals' lives would be a misery if the humans come back. As on page 22, Squealer thus scares the other animals with the idea that the humans will return. Squealer explains that, "Bravery is not enough" and that "Loyalty and obedience are more important," when referring to Snowball and Boxer agrees, "Napoleon is always right." The animals blindly follow Napoleon without thinking therefore the pigs have full control of the animals. Old Major's vision of a society free of human influence and control has become true, however, one rule has been replaced by another rule - the pigs, so most animals still do not have freedom and are still suffering. The difference is the animals knew they were suffering under the humans' control, whereas now due to the pigs' propaganda, the animals think that they are free and so do not realize they are suffering as before. RHIANNON, MIKEY, TAMARA, ELIOR, MELISSA ...read more.