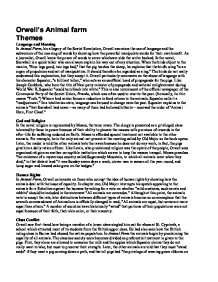 Orwell's Animal farm Themes Language and Meaning In Animal Farm, his allegory of the Soviet Revolution, Orwell examines the use of language and the subversion of the meaning of words by showing how the powerful manipulate words for their own benefit. As a journalist, Orwell knew the power of words to serve whichever side the writer backed. In the novel, Snowball is a quick talker who can always explain his way out of any situation. When the birds object to the maxim, "Four legs good, two legs bad," that the pig teaches the sheep, he explains that the bird's wing "is an organ of propulsion and not of manipulation. It should therefore be regarded as a leg." The birds do not really understand this explanation, but they accept it. Orwell particularly comments on the abuse of language with his character Squealer, "a brilliant talker," who acts as an unofficial head of propaganda for the pigs. Like Joseph Goebbels, who bore the title of Nazi party minister of propaganda and national enlightenment during World War II, Squealer "could turn black into white." ...read more.

Although at this point, the animals vote to accept the rats, later distinctions between different types of animals become so commonplace that the seventh commandment of Animalism is officially changed to read, "All animals are equal, but some are more equal than others." A number of societies have historically "voted" that portions of their populations were not equal because of their faith, their skin color, or their ancestry. Class Conflict Orwell saw first-hand how being a member of a lower class singled him out for abuse at St. Cyprian's, a school which attracted most of its students from the British upper class. He had also seen how the British ruling class in Burma had abused the native population. In Animal Farm the animals begin by proclaiming the equality of all animals. The classless society soon becomes divided as preferential treatment is given to the pigs. First, they alone are allowed to consume the milk and the apples which Squealer claims they do not really want to take, but must to preserve their strength. Later, the other animals are told that they must "stand aside" if they meet a pig coming down a path, and that all pigs had "the privilege of wearing green ribbons on their tails on Sundays." ...read more.

Any questions about past events that do not seem to match the pigs' version of those events are either discounted or explained away. For example, when some of the animals are executed after they confess to various crimes against Napoleon, some of those left alive remember that the Sixth Commandment of Animalism was "No animal shall kill any other animal." When Clover asks Muriel to read the commandment, however, it is discovered that it reads, "No animal shall kill any other animal without cause." "Somehow or other," the narrator comments, "the last two words had slipped out of the animals' memory." Similarly, when the pigs get into a case of whiskey and get drunk, Muriel looks up at the barn wall where the Seven Commandments had been written and sees that the Fifth Commandment reads, "No animal shall drink alcohol to excess." She thinks the animals must have forgotten the last two words of this commandment as well. She comes to believe that the original event of the writing of the commandments on the wall did not happen the way she and other animals remember it. With this theme Orwell challenges the Soviet state's-and any totalitarian state's-method of controlling public opinion by manipulating the truth and, in particular, rewriting history. ...read more.