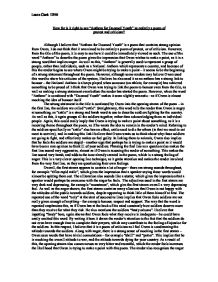 How far is it right to see "Anthem for Doomed Youth" as entirely a poem of protest and criticism? Although I believe that "Anthem for Doomed Youth" is a poem that contains strong opinion from Owen, I do not think that it was aimed to be entirely a poem of protest, or of criticism. However, from the title of the poem, it is easy to see how it could be immediately viewed as such. The use of the word "Anthem" to describe the poem gives the impression that Owen wishes to make a point, as it is a strong word that implies anger. As well as this, "Anthem" is generally used to represent a group of people, rather than individuals, such as a National Anthem which represents a country, and because of this the reader begins to see where Owen might be trying to make a point - it seems to be the beginning of a strong statement throughout the poem. However, although some readers may believe Owen used this word to show his criticism of the system, I believe he also used it as an anthem has a strong link to honour - the National Anthem is always played when someone (an athlete, for example) has achieved something to be proud of. I think that Owen was trying to link the poem to honour even from the title, as well as making a strong statement even before the reader has started the poem. ...read more.

In addition to this, using "calling" in this phrase is also effective, as Owen makes it seem as if the soldiers have never really had a choice - if you have a calling in life, it is something you are born to do. As this makes the fighting seem incredibly inevitable, it is a very depressing phrase overall, adding to the sad sentiment in these two lines. These lines are the first in altering the reader's perspective of what Owen wanted to achieve in the poem overall. I believe the main aspect of "Anthem" that prevents it being a protest entirely of criticism is the running parallel to a funeral, which is present all throughout the poem, but is most noticeable in the second stanza. Here, Owen mentions many links to a funeral, for example "candles", "flowers", and "pall". This language sounds very calm, especially in comparison to the language in the first stanza, which almost gives this part of the poem a feeling of acceptance. The language in this stanza also makes it seem as if Owen is talking more personally about the soldiers - describing them as people rather than a unit as we have seen previously. He uses multiple personal pronouns throughout this part, which gives the reader the impression that he is thinking about the soldiers more. This makes the reader feel almost as if Owens' initial anger has been calmed - as if he is seeing more clearly as a result. ...read more.

It is this line where the reader sees the change in the tone of the poem; it is here when Owen appears to have a change of heart, very suddenly. It is as if it is here when Owen realises what true honour is at this precise point in the poem, and this would explain why he goes from writing to make a point with so much anger becoming seemingly more reflective about everything. The question mark also implies that he really does not know the answer, making it seem more like an overall though, and an exploration of his feelings rather than a true protest poem. I believe that this would explain the sudden change in the language of the poem. The main emotion changes three times in this poem; from anger, to sadness, to acceptance, and I believe that this could have been intentional by Owen, as it represents the mourning process after the death of a loved one. It is effective overall because he does it subtly - constructing the poem so that it could be used as a thought process means that there are multiple ways of viewing it, giving the reader the chance to think for themselves. I believe that although Owen does make individual points throughout the poem, that this overall was his main aim - rather than to make a protest or criticise. It appears, although there is some criticism towards the beginning of the poem, that it is more a reflection of the feelings of Owen himself. ?? ?? ?? ?? Laura Clark 12EM ...read more.