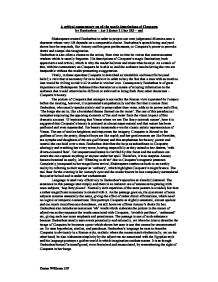 A critical commentary on all the poetic descriptions of Cleopatra by Enobarbus - Act 2 Scene 2 Line 183 - end Shakespeare created Enobarbus in order to project our own judgmental dilemma onto a character whose very life depends on a comparable choice. Enobarbus's speech being analysed shows how he responds, like Antony and his great predecessors, to Cleopatra's power to provoke desire and compel the imagination. Enobarbus is also often a chorus to the action, from time to time he voices that common-sense wisdom which is usually forgotten. His descriptions of Cleopatra's magic fascination; both appreciative and critical, which is why the reader believes and trusts what he says. As a result of this, with his commentary on Cleopatra he is able to lead the audience into believing the two are inseparable without the reader presuming exaggeration. Firstly, in these speeches Cleopatra is described as irresistible and beautiful beyond belief, a view that is necessary for us to believe in order to buy the fact that a man with so much to lose would be willing to risk it all in order to win her love. ...read more.

The passage is one of such substance because Enobarbus usually sees events prosaically and rationally, yet when he tries to describe the image of Cleopatra he becomes a poet which shows her aura is one that cannot be uncommented on. He uses hyperboles, similes, and paradoxes. Enobarbus's language he uses to describe Cleopatra is obviously in a Roman style, realistic where the nouns march rhythmically, yet on the other hand, he also elaborates simplicity by the adjectives etc associated with the Egyptian style and his language portrays a golden world in which imagination outdoes nature. It is as though Enobarbus himself is transfigured, even feminized and emasculated, by remembering the sight of Cleopatra in her barge. Enobarbus introduces the idea of Cleopatra on a throne in the opening line, and ends with Antony 'enthron'd' which creates a link between the two, suggesting love and destiny. Therefore the reader can infer their relationship is special, yet the hyperbole language used to praise Cleopatra could in some lights also suggest she is too good to be true, and that she and the setting described as so opulent could be negative as if there is too much it becomes decadence. ...read more.

When discussing Egypt, the structure is in long, elegant, poetic prose, whereas Rome is short sharp sentences, direct and to the point. The passage and structure therefore inform the reader of the wonders of Egypt and the harsh and unsettling dealings of their political world in Rome become momentarily infused with the colour, warmth and splendour of an alternative and enigmatic land. In conclusion, throughout his speech, Enobarbus uses language, form and structure to create effect. He sets up the metaphorical as the real and establishes its priority over the literal. 'The barge she sat in...burned on the water', the active verb 'burned' allows the metaphorical description to become extraordinarily vibrant, leaping outside of the limiting simile that makes the barge simply 'like a burnished throne'. This metaphorical reality continues to dominate throughout, creating a picture of Cleopatra that makes men powerless at her feet. Enobarbus uses very beautiful, poetic language which the reader could assume he could only use if he was inspired or even lamenting his own passions vicariously through the eyes of Antony. Yet, the reader believes Enobarbus' words to be the truth as he acts as a commentator throughout, truthful and cynical and therefore the reader trusts his description of Cleopatra and consequently how Antony has fallen so suddenly in love with her. ?? ?? ?? ?? Emma Williams 12F ...read more.