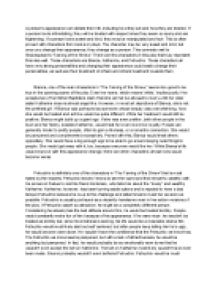 Appearance and Personality in Taming of The Shrew

﻿A person?s appearance can dictate their life, including how they act and how they are treated. If a person looks intimidating, they will be treated with respect since they seem so scary and are frightening. If a person looks sweet and kind, they may be manipulated and hurt. This is often proved with characters from books or plays. The character may be very sweet and kind, but once you change their appearance, they change as a person. This connects well to Shakespeare?s ?Taming of the Shrew.? There are few characters in this play that truly represent this idea well. Those characters are Bianca, Katherine, and Petruchio. These characters all have very strong personalities and changing their appearance could easily change their personalities, as well aso their treatment of others and others treatment towards them. Bianca, one of the main characters in ?The Taming of the Shrew,? seems too good to be true in the opening scene of the play. ...read more.

Petruchio is definitely one of the characters in ?The Taming of the Shrew? that is most hated by the readers. Petruchio leaves Verona to see the world and find himself a wealthy wife. He arrives in Padua to visit his friend Hortensio, who tells him about the ?lovely? and wealthy Katherine. Katherine, however, has been turning aside suitors and is reputed to have a bad temper.Petruchio believes he is up to the challenge and determines to meet her as soon as possible. Petruchio is usually portrayed as a decently handsome man in live-action versions of the play. If Petruchio wasn?t so attractive, he might be a completely different person. Considering he already has the bad attitude around him, he would be treated terribly. People would constantly make fun of him because of his appearance. If he were nicer, he wouldn?t be treated as terribly but, since his kindness is lacking, his life would be a miserable drama film. Petruchio would most likely start out self centered, but after people keep telling him he?s ugly, he would become wore down. ...read more.

People would hate her because she?s both unattractive and the worse sister beneath Bianca. If we carry in the changed Petruchio in this, he wouldn?t even want to take the bet on Katherine, so Katherine wouldn?t feel any love at all, which is even less than the normal Katherine. Katherine, essentially, would already be ?tamed? in a way. Shakespeare?s characters are often pretty well explained when it comes to personality. It?s often set in stone the characteristics of a character, but their appearance is often up to personal interpretation. In ?The Merchant of Venice?, Shakespeare leaves appearance quite up to interpretation and one could honestly dress the characters any way they please. However, these costumes could change a character, be it how they are treated, how they treat others, or even how they act. These characters, Bianca, Katherine, and Petruchio, would change wildly as people once their appearance changed, since they have such strong personalities already. Bianca would become self centered, Katherine would be hated even more than she is now, and Petruchio would be emotionally worn down. That is how a character's appearance can change their personality. ...read more.

This student written piece of work is one of many that can be found in our GCSE Taming of the Shrew section.