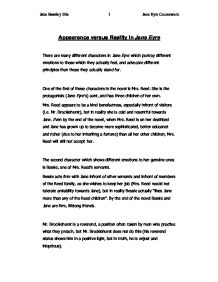 Appearance versus Reality in Jane Eyre

Appearance versus Reality in Jane Eyre There are many different characters in Jane Eyre which portray different emotions to those which they actually feel, and advocate different principles than those they actually stand for. One of the first of these characters in the novel is Mrs. Reed. She is the protagonists (Jane Eyre's) aunt, and has three children of her own. Mrs. Reed appears to be a kind benefactress, especially infront of visitors (i.e. Mr. Brocklehurst), but in reality she is cold and resentful towards Jane. Even by the end of the novel, when Mrs. Reed is on her deathbed and Jane has grown up to become more sophisticated, better educated and richer (due to her inheriting a fortune) than all her other children, Mrs. Reed will still not accept her. The second character which shows different emotions to her genuine ones is Bessie, one of Mrs. Reed's servants. Bessie acts firm with Jane infront of other servants and infront of members of the Reed family, as she wishes to keep her job (Mrs. ...read more.

Jane Eyre is 'tricked' into accepting her position of governess at Thornfield Hall by appearance versus reality. She accepts, because the letter she receives inviting her to Thornfield is from Mrs. Fairfax, and Jane believes that her employer will be a woman, but in reality, her employer is a man: Mr. Rochester. If Jane had known this at the time, she probably would have declined the employment. Mr. Rochester is probably the most important character in the novel, excluding Jane herself. Mr. Rochester often deceives people to hide his true emotions, as well as to find out theirs. When Jane first meets Mr. Rochester he is brisk and curt with her, she does not know who he is and mistakes him for a traveller. Mr. Rochester gives the appearance to the guests of his house that he loves and wished to marry Miss Blanche Ingram. Miss Blanche Ingram also gives the impression that she loves Mr. Rochester. However, Blanche is putting on a fa�ade and only wishes to marry Mr. Rochester for his wealth, and Mr. ...read more.

Mr. Rochester is tricked by appearance versus reality. However, despite Mr. Rochester's appearance as a cold, gruff person (which most who do not know him well would perceive him to have), he takes his vows seriously and looks after Bertha, keeping her safe in the "North Tower" of Thornfield Hall. Grace Poole can be used as yet another example of not being all she seems. All the nightly wanderings and malicious laughter of the insane Bertha Mason is blamed on Grace Poole, whereas in reality it is not her. St. John is Jane Eyre's half cousin, and appears nice, warm and friendly, but in reality suppresses his true feelings. He wants to marry Jane because he thinks her a useful tool, and not because he loves her. The woman he truly loves, Rosamund Oliver, he hides his feelings for because he believes she will not make a suitable wife of a missionary. St. John cannot see what Jane Eyre really is, because of her own appearance versus reality. He does not really see that she is so compassionate that she could never leave someone she loves so dearly as Mr. Rochester behind and travel to India. ?? ?? ?? ?? Jake Beazley 5Ea 1 Jane Eyre Coursework ...read more.