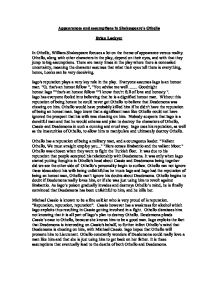 Appearances and assumptions in Shakespeare's Othello

Appearances and assumptions in Shakespeare's Othello Brian Lockyer In Othello, William Shakespeare focuses a lot on the theme of appearance versus reality. Othello, along with other characters in the play, depend on their eyes, and with that they jump to big assumptions. There are many times in the play where there is concealed uncertainty, meaning the character assumes that what their eyes tell them is everything, hence, Looks can be very deceiving. Iago's reputation plays a very key role in the play. Everyone assumes Iago is an honest man. "O, that's an honest fellow ", "You advise me well ........ Goodnight honest Iago ""that's an honest fellow ""I know thou'rt full of love and honesty ". Iago has everyone fooled into believing that he is a dignified honest man. Without this reputation of being honest he could never get Othello to believe that Desdemona was cheating on him. Othello would have probably killed him if he didn't have the reputation of being an honest man. Iago knew that a significant man like Othello could not have ignored the prospect that his wife was cheating on him. ...read more.

Iago exploits the fact that Desdemona is interceding on Cassio's behalf, to further infect Othello's mind that Desdemona is cheating on him, with Michael Cassio. Iago hopes that Othello will promote him to Lieutenant. Othello constantly wonders if Desdemona could really love a man like him and that she is just using him to get back on her father. It is these assumptions that eventually lead to the deaths of both Othello and Desdemona. One of the first instances where the theme appearance versus reality appears is when Othello sees Cassio walking away very quickly after talking with Desdemona. The foundation around which Othello is doubtful comes from Iago. Iago plants seeds of doubt into Othello's mind about Cassio and Desdamona by sneakily saying "...I cannot think it, that he would steal away so guilty like." Othello then replies, "...I do believe 'twas he." However in reality, Cassio and Desdemona are actually talking about how to get Cassio's job back. A second example in the play where appearance versus reality presents itself is when Iago places Othello where he can see Cassio but cannot hear him. ...read more.

He comments to Iago, Is this the noble Moor, whom our fill senate Call all in all sufficient? Is this the nature Whom passion could not shake, whose solid virtue The shot of accident nor dart of chance Could neither graze nor pierce? Iago then talks behind Othello's back saying that he has changed a lot and starts blaming Othello for his own change. Ludovico assumes that Othello has changed a lot because striking your wife is an inconceivable crime. But like most characters in the play, he is unaware of the poison that Othello has been fed. This event is the last occurrence of the theme appearance versus reality. From this point onwards, the truth starts to emerge. Appearance versus reality is a key idea in this play. Not only are looks deceiving, but they cause trouble, trouble that is often unfixable. People nowadays, just like those in earlier years jump to unnecessary conclusions just by seeing and assuming. It is therefore vital to obtain all the facts before assuming something as disasters may occur just like in Othello. One of the many lessons we can take from Othello is that seeing isn't always believing. ...read more.

This essay ably engages with the task in respect to the appearances and assumptions used in the plot, however it is missing the discussion of this significance or its dramatic effect on the audience. Although the question doesn't explicitly ask ...

This essay ably engages with the task in respect to the appearances and assumptions used in the plot, however it is missing the discussion of this significance or its dramatic effect on the audience. Although the question doesn't explicitly ask for a discussion, without doing so and simply narrating the plot, you will only gain low levels of marks. I would like to note that this a key problem when doing an essay on themes - essays tend towards acknowledging the themes throughout rather than analysing the effect on the audience and why Shakespeare uses them.

The analysis in this essay is weak. I would make it clear that simply quoting the text does not count as analysis. The quotes need to be analysed, and in particular language and imagery needs to be addressed. Shakespeare uses plenty of language techniques and images throughout, so it was a shame not to see any close analysis here. The weakness lies in the essay retelling events - showing awareness of the assumptions of the plot will not gain you any marks. If I was doing this essay, I would say you must address the audience's response to Othello's assumption that Desdemona has been unfaithful. A simple discussion of the audience feeling sympathy for Desdemona and fear of what Othello may do, and thus a hatred for Iago, would gain credit. It is also key to address the significance of assumptions - without assumptions the tragedy would occur, and this is arguably Othello's hamartia. Discussion of such technical terms will gain credit. I'd like to note that showing awareness that Othello is a play is key, and this can be easily done by mentioning character's presence on stage.

This essay has an okay structure, having a clear introduction and conclusion. However, each paragraph is just another example of appearances and assumptions in the plot. I would've like to have seen a deeper discussion within each paragraph about the significance on the play and the audience. Spelling, punctuation and grammar are fine, but I would advise against using long quotes as this essay sometimes has.