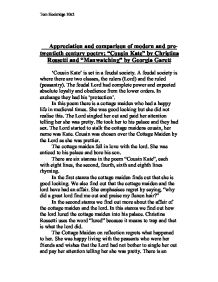 Appreciation and comparison of modern and pre-twentieth century poetry: &quot;Cousin Kate&quot; by Christina Rossetti and &quot;Manwatching&quot; by Georgia Garett

Appreciation and comparison of modern and pre-twentieth century poetry: "Cousin Kate" by Christina Rossetti and "Manwatching" by Georgia Garett 'Cousin Kate' is set in a feudal society. A feudal society is where there are two classes, the rulers (Lord) and the ruled (peasantry). The feudal Lord had complete power and expected absolute loyalty and obedience from the lower orders. In exchange they had his 'protection'. In this poem there is a cottage maiden who had a happy life in medieval times. She was good looking but she did not realise this. The Lord singled her out and paid her attention telling her she was pretty. He took her to his palace and they had sex. The Lord started to stalk the cottage maidens cousin, her name was Kate. Cousin was chosen over the Cottage Maiden by the Lord as she was prettier. The cottage maiden fell in love with the lord. She was enticed to his palace and bore his son. There are six stanzas in the poem "Cousin Kate", each with eight lines, the second, fourth, sixth and eighth lines rhyming. In the first stanza the cottage maiden finds out that she is good looking. We also find out that the cottage maiden and the lord have had an affair. She emphasises regret by saying, "why did a great lord find me out and praise my flaxen hair?" ...read more.

She is compared to an animal not being happy by saying, "even though I sit and howl in dust". The cottage maiden is not happy because she really did love the lord but cousin Kate did not love him. She just married him because she wanted the money. In stanza five the first two lines show that cousin Kate did not really love the lord. It says that her love was writ in sand, which means that it can easily blow away. He fooled me but did not fool you. The cottage maiden accuses cousin Kate of being bought by the lord because she wanted more money and to be of a higher class. She says he would not have won her with his love or bought her with his land because she was her cousin, and she would have back into his face and she would not have married him. I would not have married him because I knew I would be upsetting you, but you went through with it even though you knew that I loved him and had feelings for him. In the last stanza the cottage maiden boasts about having a baby because cousin Kate does not have any children, and any gift that the lord gave her cannot be as good as the gift I have got. ...read more.