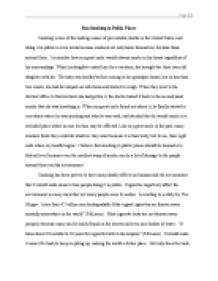 Argumentative Essay about Why Smoking Should be Banned

﻿Page | ________________ Ban Smoking in Public Places Smoking is one of the leading causes of preventable deaths in the United States, and doing it in public is even worse because smokers not only harm themselves, but also those around them. I remember how my great uncle would always smoke in his house regardless of his surroundings. When his daughter visited him for a vacation, she brought her three year old daughter with her. The baby was healthy before coming to her grandpa's house, but in less than two weeks, she had developed ear infections and started to cough. When they went to the doctors' office to find out how she had gotten it, the doctor linked it back to the second hand smoke that she was breathing in. When my great uncle found out about it, he finally started to care about where he was smoking and who he was with, and decided that he would smoke in a secluded place where no one but him may be affected. ...read more.

Though many smokers already know of the health risks that come with smoking cigarettes, but what most of them do not, is how secondhand smoking can affect other people. ?Breathing in low doses of secondhand smoke can increase a person?s risk of heart attack? according to a study by Dr. Meyers, a professor of Cardiology and Preventive Medicine at University of Kansas (Sciencedaily.com). Smokers should not risk non-smokers for something that they do. In continuation of Dr. Meyers? study is that, ?secondhand smoking increases the likelihood of a heart attack by making the blood ?sticky?, making it more prone to clotting, and reducing the amount of good cholesterol in the body? (Sciencedaily.com). Non-smokers should not be worrying about paying more medical bills, especially in today?s economic situation. Many businesses provide health insurance to their employees. According to a statistical data collected by Live Strong, employers spend an extra $49 million in medical costs for employees who are exposed to secondhand smoking in their jobs (Nelson). ...read more.

Smoking in public should be banned at a federal level without question. Smoking negatively affects people, the environment and businesses. There are no logical reasons to allow smoking in public places and doing so does not benefit anyone but cigarette makers. Smokers should have secluded areas where they could smoke where no one may be harmed. The government should provide trash cans in these areas so smokers would not just throw their cigarette butts on the floor. Anyone caught smoking in public places and littering their cigarettes should be fined. Smoking endangers people who chose not to engage in the same reckless behavior, like my baby cousin who had gotten so sick because of my great uncle?s smoking. It also dirties our environment and harms other animals that are in search of food. Businesses who provide health insurance to their workers affected by second hand smoking are wasting money that could be used to hire more employees. Banning smoking in public may lead to a better way of life and a healthier place to live. ...read more.