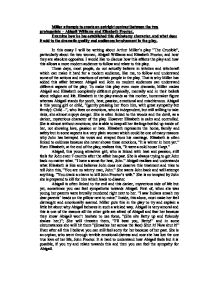 Arthur Miller's play &quot;The Crucible&quot;, discussing the two women, Abigail Williams and Elizabeth Proctor, and how they are absolute opposites.

Miller attempts to create an outright contrast between the two protagonists - Abigail Williams and Elizabeth Proctor. Examine how he has established this dichotomy character, and what does it add to the dramatic quality and audiences involvement in the play. In this essay I will be writing about Arthur Miller's play "The Crucible", particularly about the two women, Abigail Williams and Elizabeth Proctor, and how they are absolute opposites. I would like to discuss how this affects the play and how this allows a more modern audience to follow and relate to this play. These days, most people, do not actually believe in witches and witchcraft which can make it hard for a modern audience, like me, to follow and understand some of the actions and reactions of certain people in the play. That is why Miller has added this affair between Abigail and John so modern audiences can understand different aspects of the play. To make this play even more dramatic, Miller makes Abigail and Elizabeth completely different physically, mentally and in their beliefs about religion and life. Elizabeth in the play stands as this mother, homemaker figure whereas Abigail stands for youth, heat, passion, emotional and mischievous. Abigail is this young girl or child, "(gently pressing her from him, with great sympathy but firmly): Child -", who lives on emotions, who is independent, but still willing to take risks, she almost enjoys danger. She is often linked to the woods and the devil, as a darker, mysterious character of the play. However Elizabeth is calm and controlled. She is almost without emotions; she is able to keep all her feelings bottled up inside of her, not showing love, passion or hate. Elizabeth represents the home, family and safety but in some aspects is a very plain woman which could be one of many reasons why John has betrayed his vows and strayed from his marriage. ...read more.

John knows he has to tell Danforth about his and Abigail's affair to save other peoples' lives and expose Abigail for the liar she really is. "(trembling, his life collapsing about him): I have known her, sir. I have known her." Now Abigail finally realises there is no hope between her and John. At this point of the play Mary Warren is under question about the witchcraft, she has already named Abigail a liar but because of Abigail's brilliant acting skills and because she is such a dominant character, she is able to put on this act, accusing Mary Warren of sending her spirit after them. Danforth believes Abigail and so now Mary has no choice but to name John for performing witchcraft. "(Pointing at Proctor):You're the devil's man!" Mary has probably done this because she realises there is no beating Abigail, she is too strong a character and so Mary has not much other choice but to join her in this acting. After looking at Abigail, I looked at Elizabeth and came to find that these two characters, Abigail and Elizabeth, are the complete opposites. Miller chooses to write these opposites for dramatic contrasts in the play which, again, keeps the audience on the edge of their seats wandering and guessing, wanting to know who John is going to go for because Elizabeth has deliberately been created to be boring and plain. Elizabeth is linked with the coldness and winter. "It's winter in here, yet." because she never shows her emotions, she keeps them all bottled away, as if she had none. Elizabeth knows she is plain and knows she doesn't show these emotions. She admits it. "I never knew how I should show my love. It were a cold house I kept!" Now, because of Elizabeth being the way she is, some of the blame for John's affair could be put across to her. ...read more.

Parris has walked in on Abigail and the girls dancing in the woods, which if found out by the courts, she could be whipped. Firstly, Parris is on the attack, shouting at Abigail because Parris is a reverend and if some witch was being held in his household he would lose his position in the church. "(With anger): I saw it!" Abigail acts as this sweet and innocent little girl "(Quavering, as she sits): I would never hurt Betty. I love her dearly." I know this is not true because she smashes her across the face later on in the play! However about minutes later, the tables have turned completely because Abigail is a stronger character, she is attacking Parris and he is apologising to Abigail getting her off the hook. Abigail is such a strong character, she is able to stand up to anyone confidently, with no fear. She even stands up to Danforth one of the most powerful men at that time. "(Stepping up to Danforth): What look do you give me?" This could be suicide. Danforth has the power of life and death. She is so confident in herself she even threatens him. "(In an open threat): Let you beware, Mr Danforth. Think you be so mighty that the power of hell may not turn your wits? Beware of it!" Now to most people, doing that, you would have just signed your own death warrant but because of all this she has gained throughout the play and her superb acting skills she is confidently able to stand up to this man without fear of death. Nowadays, it is very hard to believe they hung so many people over such a ridiculous subject like witchcraft. No-one in today's society believes in witches and witchcraft, therefore it is hard for someone of a modern audience, like me, to relate to such a play. This is the reason Miller added John and Abigail's affair so we had something to relate to making it more dramatic and affective. Alex Holmes 10 Red 8th February 2003 ...read more.