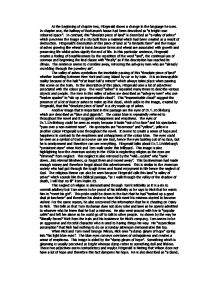 At the beginning of chapter two, Fitzgerald shows a change in the language he uses. In chapter one, the hallway of Buchanan's house had been described as &quot;a bright rose-coloured space&quot;.

At the beginning of chapter two, Fitzgerald shows a change in the language he uses. In chapter one, the hallway of Buchanan's house had been described as "a bright rose-coloured space". In contrast, this "desolate piece of land" is described as "a valley of ashes" which perceives the image of a city built from a material which had been created as a result of destruction. Fitzgerald's description of this piece of land as "a fantastic farm" and the image of ashes growing like wheat is ironic because farms and wheat are associated with growth and preserving life whilst ashes signify the end of life. In this particular sentence, Fitzgerald creates a feeling of breathlessness by the repetition of the word "and", the continual use of commas and beginning the final clause with "finally" as if the description has reached its climax. The sentence seems to crumbles away, mirroring the ash-grey men who are "already crumbling through the powdery air". ...read more.

Fitzgerald talks about Dr.T.J.Eckleburg's "persistent stare" when Nick and Tom walk under this billboard. This image is also highlighting how the American society in the 1920s is neglecting religion as the eyes are "dimmed" from neglect. This neglect is also mirrored by the "wild...oculist" who "sank down...into eternal blindness, or forgot them and moved away". This businessman had made enough money and therefore forgot about this advertisement. This is similar to the American society who had got through the tough times and found enjoyment in life hence the neglect of God. The religious theme can also be seen because Fitzgerald calls this land "a valley of ashes" which sounds like the biblical passage, "as I walk through the valley of the shadow of death, I will fear no ill" from Psalm 23. This neglect of religion is demonstrated through Tom's infidelity as it is a sin to commit adultery but Tom seems to be proud of his infidelity as he says to Nick that he wants him to "meet his girl". ...read more.

He is also described as "a blond, spiritless man, anaemic, and faintly handsome". Nick seems to see something positive behind something which seems negative on the outside. A blond, anaemic and spiritless man does not convey a positive image but Nick still points out that he is "faintly handsome". This is not the only example of this feature of Nick's character. When Nick and Tom first enter the garage, the interior is described as being "unprosperous and bare". Nick also sees that there is only one car, the "wreck of a Ford", in this garage which is ironic as this is a garage but there is only one car which a potential customer can see. However, Nick thinks that "the shadow of the garage was a blind" and that there were "sumptous and romantic apartments" behind this. This again demonstrates Nick's naivety as he is used to seeing beautiful things such as Tom's house. It also creates an anticlimax as this passage had been building up to seeing this garage and meeting Wilson but neither seems to have had lived up to the build up it recieved. ...read more.